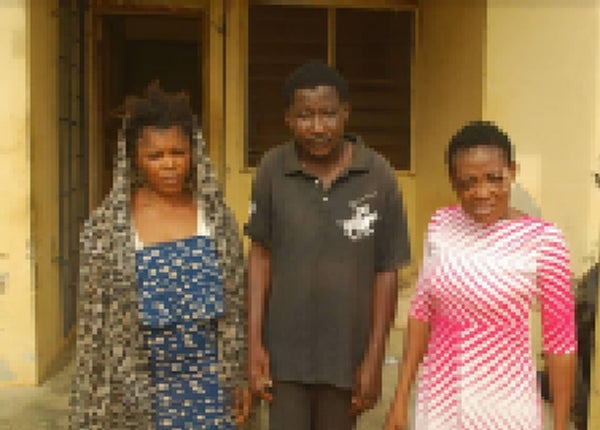 A 39-year-old female member of a One Chance robbery gang arrested by operatives of Niger State Police Command, Ebele Uji Chinonso, said it was frustration that led her into robbery.

Chinonso said: “I have been engaged in many businesses but they all collapsed.

“I recently went into buying and selling but I discovered that it was not flourishing and I, therefore, ended up joining this One Chance gang.

“I also had issues with some people in my previous business and this finally forced me to the robbery but unfortunately, I was nabbed by the Police.”

It was gathered that she was arrested alongside Samuel Alilu, 35, and another female, Nonye Agu, 38.

It was also gathered that one of the recent victims, Mary Ozarieze Joseph, reported to the police that she boarded a vehicle from Zuba to Madalla and in the course of the journey she was pushed down by one of the occupants of the vehicle before Madalla and the car zoomed off with her purse containing Infinix Hot 4, Tecno Spark 3 mobile phones and N10,000.

The suspects, it was further gathered, had been operating along Zuba-Madalla Road for the past five years dispossessing unsuspecting passengers of their belongings, including cash.

The suspects were said to have been dislodged by the Police on several occasions only to regroup to the spot to unleash terror on the commuters plying the route.

Contacted, the state command’s Public Relations Officer, ASP Wasiu Abiodun, confirmed the incident, adding that the suspects have confessed to the crime and that they would be arraigned immediately investigation is completed