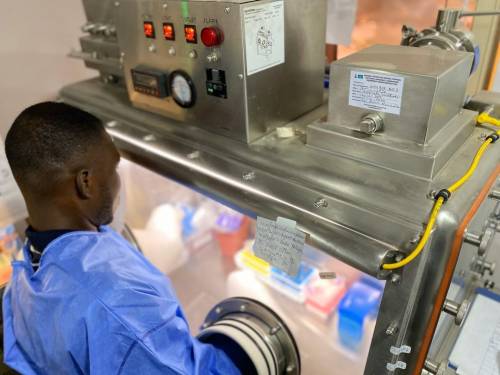 A handful of Nigerians, who shared their experiences with SaharaReporters, said that even when they contacted the NCDC to reveal that they had symptoms of the virus, the agency simply ignored them and instead asked that they self-isolate.

As the number of confirmed Coronavirus cases continue to rise in Nigeria, citizens have slammed the Nigerian Centre for Disease Control over the slow pace at which it was conducting tests on persons with suspected symptoms of the virus.

A handful of Nigerians, who shared their experiences with SaharaReporters, said that even when they contacted the NCDC to reveal that they had symptoms of the virus, the agency simply ignored them and instead asked that they self-isolate.

On other occasions, telephone numbers of the agency never connect when dialled by citizens with suspected symptoms.

Recall that SaharaReporters had previously reported how the low testing by the NCDC had been a factor for the low number of confirmed cases in the country.

As a result, the country only has 111 confirmed cases and one recorded death.

To further highlight this flaw, SaharaReporters had also exclusively reported how a Nigerian, who tested positive for the virus, was sent back home due to lack of bed space at a government hospital in Lagos.

For instance, Mallam Salisu Abdullahi, who resides in Abuja, explained to SaharaReporters on Sunday how he called the NCDC after experiencing symptoms but was not attended to by the agency for weeks.

He said, “I attended the IGP’s son wedding in Abuja and days after I started feeling flu-like symptoms just like Coronavirus.

“I called the centre and they kept saying that they will come to see me but they never did.

“Eventually, after about two weeks when I sent a letter to the DG of NCDC, they came and took my blood for test on Saturday.”

Abdullahi, who is still expecting the result of his blood sample, urged government to strengthen the NCDC for the agency to have the capacity to attend to many Nigerians needing testing.

Another Nigerian, who was denied the COVID-19 test, in a chat with our correspondent, lamented the difficulty in getting NCDC to test persons with suspected symptoms for the virus.

He said, “I was in Asokoro General Hospital last week to complain about some unusual feelings including breathing difficulty, I was told that doctors were on strike. After several efforts, a doctor agreed to prescribe some medications for me without any test.

“He advised me to take the tabs for seven days, if no relief observed, I should call NCDC.

“I have been calling them since but to no avail. Initially, a lady picked my call and asked for my details, after I sent her a text message, she responded that they were not in charge for people outside Abuja.

“She sent another number to me which I have been calling since but realised the number does not exist. I wonder how we can succeed with this fight.”

In a post on Twitter, Mustapha Hadi, lamented the lack of test centres in Northern Nigeria, adding that the NCDC had become a regional agency.

“With Zero testing centres in the North-East and North-West regions of Nigeria, we no longer understand whether NCDC is really a national agency or a regional one.

“We must raise our voices and demand the provision of testing centres.”

According to Yaseer Kugu, another Twitter user, the non-testing of Nigerians with suspected symptoms of the virus could lead to a further spread of the pandemic in the country.

He said, “So far, the positive cases for Coronavirus in Nigeria are people with the privilege to be tested.

“Only God knows how many carriers are out there spreading the virus unknowingly.

“That’s why it’s advisable to stay at home and adhere to NCDC guidelines on the virus.