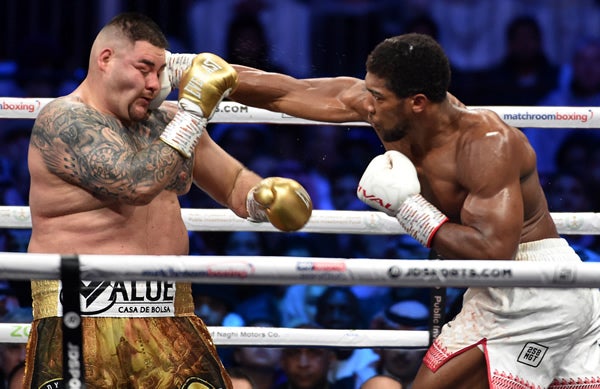 Anthony Joshua may lock horns with Andy Ruiz Jr once again in the future after his promoter Eddie Hearn teased a trilogy.

Joshua took Ruiz apart in their December rematch to round off a dominant points victory and become a two-time world champion in Saudi Arabia – avenging his shocking loss to the Mexican, who had stopped him in New York months earlier.

With both men winning one fight each, Ruiz had immediately called for a third bout to settle the contest, although many fans are hoping for Joshua to instead take on Tyson Fury or Deontay Wilder instead in a mega undisputed fight

But Hearn has suggested that Joshua and Ruiz could eventually share a ring together again, saying the 30-year-old will ‘fight everyone’, including Ruiz. But he had doubts over whether the Mexican was ready for a huge fight again after making a sizeable profit from his first two fights with the Brit.

“He will fight everybody, and that probably includes a third fight with Ruiz at some point if he keeps winning or if he’s still around,’ he told Fighthub.

Who knows what Ruiz is going to do? He’s made a lot of money. Maybe he sails off into the sunset.

“It’s not just the partying, it’s the travelling, talk shows, party, media, game show, Jimmy Kimmel, and that drains you. That’s one of the things that AJ did wrong. He did too much of that. It’s like an obligation of being a champion.”