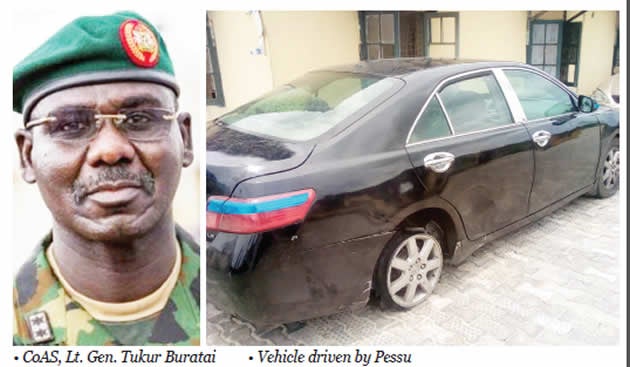 A motorist, identified as Joseph Pessu, was shot dead in Warri, Delta State, on Thursday, by a soldier for allegedly flouting the state government’s sit-at-home order to prevent the spread of the coronavirus.

Eyewitnesses said the middle-aged motorist, who was cruising in a black Toyota Camry car without number plate, failed to stop at a military checkpoint on the NPA Road when the soldiers ordered him to halt.

Our correspondents gathered that rather than stop, Pessu allegedly accelerated the car in a bid to beat the security personnel.

But a soldier in the security team, who was apparently infuriated by the motorist’s effrontery, fired at the right rear tyre of the car in order to force the driver to a halt.

Pessu was alleged to have continued driving for several metres until he got to a location and abruptly parked the vehicle in the middle of the road.

He was said to have jumped out of the car to escape into the nearby bush, but a bullet from the gun of one of the soldiers pursuing him hit him.

His corpse was taken to the Police Area Command, from where it was transferred to the Warri Central Hospital’s morgue.

Meanwhile, two naval personnel, who were riding on a motorcycle in the area, were attacked by an angry mob few hours after the incident.

The angry mob, who had earlier made bonfires on the road to prevent vehicular movement, poured petrol on the motorcycle and set it ablaze to the astonishment of onlookers.

When contacted, the state Commissioner of Police, Hafiz Inuwa, confirmed the killing.

“Yes, a motorist was killed, but I have not got the details of the incident,” he simply told our correspondent on the telephone.