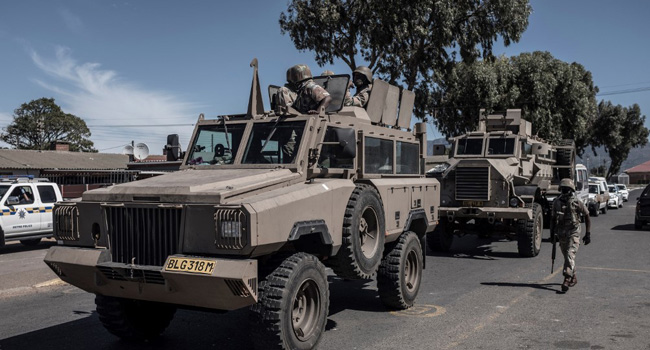 South African President Cyril Ramaphosa on Thursday prolonged by a further 14 days a national lockdown aimed at stemming coronavirus, saying the struggle was “far from over” as infections rose to 1,934.

“After careful consideration of the available evidence, the national coronavirus command council has decided to extend the nationwide lockdown by a further two weeks beyond the initial 21 days,” Ramaphosa announced in a televised address.

The president added that while it was too early to make a “definitive analysis” of the pandemic in South Africa, there was evidence to suggest the measures had been effective.

“In the two weeks before the lockdown, the average daily increase in new cases was around 42 percent,” Ramaphosa said.

“Since the start of the lockdown, the average daily increase has been around four percent.”

But he warned against complacency and said it was not the time to “relax”.

South Africa is the worst-affected country on the continent, followed by Algeria with 1,666 cases confirmed so far.

The number of deaths remains relatively low, with 18 fatalities recorded to date.

Ramaphosa said he recognised the “great sacrifices” made by citizens and vowed to adjust lockdown measures so as to enable “a phased recovery of the economy”.

Despite a recession and huge public debt, Africa’s most advanced economy has set aside millions of rands for businesses and workers affected by the shutdown.

The president and all his ministers will now also take a one-third salary cut for three months and donate the money to the country’s virus solidarity fund.

“If we end the lockdown too soon or too abruptly, we risk a massive and uncontrollable resurgence of the disease,” Ramaphosa warned.

The main opposition Democratic Alliance (DA) party called for a “gradual phasing out” of the lockdown to prevent a “complete economic collapse”.

“We must ensure that in our attempt to protect our country from the coronavirus outbreak, we also protect the livelihoods of our citizens who will be… unemployed as a result,” said the party in a statement after Ramaphosa’s address.

South Africa embarked on a mass door-to-door screening and testing campaign last week, with thousands of field workers deployed across the country of 57 million people.

Mobile phones will be used to track people who may have come into contact with infected citizens.

But the president said testing would only provide a “better picture” of the infection rate and that only behavioural changes would stop the respiratory disease from spreading.

“The struggle against coronavirus is far from over,” Ramaphosa added. “But we know that this is a matter of survival, and we dare not fail.”