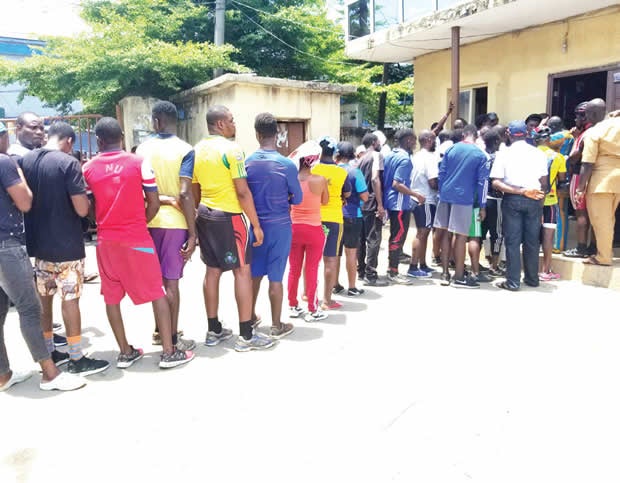 A mobile court sitting at the Lagos State Criminal Investigation and Intelligence Department, Panti, Yaba, on Thursday, convicted 189 out of the 202 persons arraigned for violating the lockdown order of the government to curb the spread of the coronavirus pandemic in the state.

Sixty juvenile violators, including some with hearing and speech impairment, were also ordered to do community service.

FASTLOADED TEAM gathered during a visit to the SCIID that the violators were arrested while playing football, jogging and partaking in different forms of physical exercise in different parts of the state.

The Officer-in-Charge of the SCIID, DCP Yetunde Longe, said the violators were immediately taken to the mobile court for arraignment after their statements had been taken.

During the court proceedings, the defendants stood in queues and took turns before magistrates Lateef Layeni and Bimbo Oshodi-Makanju.

While some pleaded guilty for violating the lockdown order, others protested their arrests, claiming that they observed social distancing while exercising.

The state Police Public Relations Officer, Bala Elkana, told journalists that the 202 persons were arrested while playing football and exercising on major streets, adding that they were arraigned on one count of violating the social distancing directive of the Lagos State Government.

The PPRO stated, “On Thursday, April 9, 2020, police officers on enforcement of the restriction of movement arrested 202 suspects for violating the stay-at-home directive of the government. The suspects were arrested playing football on major streets and having group exercise in large numbers, which negated the principles of social distancing.

“Among the charged suspects, 189 pleaded guilty, while 13 pleaded not guilty. At the end of the trial, the suspects, who pleaded guilty, were ordered to pay fines ranging from N5,000 to N10,000. They were also sentenced to two hours of community service, which was supervised by officials of the Social Welfare Unit.”

The Coordinator of the Mobile Court, Lagos State Ministry of Justice, Arinola Ogbara-Banjoko, said the 60 juvenile violators, including those with hearing and speech impairment, were asked to do community service because of their ages and condition.

She added that those among the convicts, who could not afford to pay the fine, were asked to do community service for a day and sent home with a warning that they should stay at home for their safety.

Ogbara-Banjoko stated, “We started the mobile court today (Thursday) because of the low compliance with the lockdown order and 202 persons were arraigned before the court; in addition, 60 juveniles, including people with hearing and speech impairment, were also brought.

“About 80 per cent pleaded guilty and have been asked to do community service for some hours and also to pay a fine of N10,000. For the few, who pleaded not guilty, their trial will take place later on and if they are found not guilty, they will be released.”

One of the violators, Oluchukwu Okafor, said she was the only one jogging at the time of her arrest, adding that she had to exercise based on her doctor’s advice.

The 20-year-old explained, “I was arrested around 6am in Bariga. I left my house around 5am to jog and while returning home, policemen accosted me. I initially thought that they wanted to ask me for something, but they told me to sit on the floor and I was brought here. I pleaded with them that I have a heart problem and that I was jogging on my doctor’s advice.

“I went to hospital in early January and my doctor said I am obese. I told the magistrate that I had a prescription and a clinic that I attend every Monday at LUTH, but she said there was no proof. I told her that all my documents and appointment card were at home. But I was told to do community service for a day and pay a fine of N10,000. But I am unemployed and I don’t have the money.”

Another violator, who identified himself simply as Abudu, said, “I am bearing the consequences of my action. I believe that if I had stayed indoors, this would not have happened. I am waiting for my trial; it is when I meet the magistrate that I will know if I will be fined or asked to do community service and from there go into isolation.”

One Emmanuel Williams said it was wrong to sentence the violators to community service and still fine them.

Williams stated, “I know the importance of observing social distancing and I was moving alone. I was just trekking as there is no outright restriction on movement. I was told to do community service by cleaning the environment and still pay N5,000.

“This is very wrong; how can we be punished twice? It is either we do community service or we make the payment. But the two are applicable to me and it is not right.”