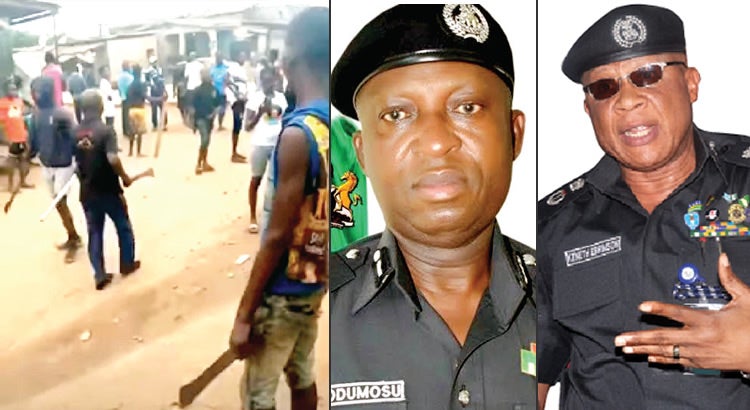 Residents of some communities in Ogun and Lagos have lost sleep over robberies in the neighbourhoods by a gang of roaming hoodlums seizing the coronavirus lockdown to unleash terror on the two states.

There have been overwhelming complaints by residents of Owode, Ilepa, Ifo, Arigbajo, Itori, Dalemo, Ijoko, Ogba Ayo, Mosa, Joju, Sango, Ota, Oniyale among other communities in Ifo and Ado-Odo Ota local government areas of Ogun State over how hoodlums have been dispossessing them of their valuables day and night.

There was also unrest in FESTAC Town, Jankara and Ifako-Ijaiye areas of Lagos State on Saturday afternoon as hoodlums besieged the populated areas to rob residents and loot shops.

The incidents have marred the 14-day lockdown order of the President, Major General Muhammadu Buhari (retd.), to contain the spread of COVID-19 in the two states.

FASTLOADED had reported that a gang led by an ex-convict identified simply as Felix aka Confidence, sacked a police checkpoint in Dalemo, Ogun State on Tuesday and robbed residents.

Although a reinforcement team later dispersed the robbers, it was gathered that they struck again around 10pm on Friday at Agbado Crossing and Randle in the Ifo Local Government Area of Ogun State.

Many residents said they had resorted to keeping vigils and making bonfires to secure their communities from the hoodlums which they said numbered about 200.

Sources told our TEAM that the hoodlums are always armed with cutlasses and locally made guns while striking in droves.

A resident of Ijoko, Sanni Rabiu, said, “I couldn’t sleep till morning for two days now.”

In what he described as ‘sinister effects of COVID-19,’ another resident, Opeyemi Johnson, said thugs had become thieves and called on security personnel to act fast.

“I was outside our gate almost all night with fume-stricken bonfires,” he added.

“We need help in Ogun State. People are being robbed not only at night but in the afternoon too. Ijoko, Ifo, Sango and the likes have been under robbery attack since this (last) week. We can’t sleep; residents take turn to do vigilantes,” a youth, who spoke on condition of anonymity, said.

Outcries of residents within the troubled communities have also flooded the social media, calling out police authorities with the hashtag, ‘#Ogununrest.’

“The people of Sango Ota, Owode, Ilepa, Ifo, Arigbajo, Itori, Dalemo, Ijoko, Ogba Ayo, Mosa can no longer sleep or be at peace because of incessant armed robbery every day even (in) broad daylight. They are ransacking house to house. I am a victim this afternoon. Help,” one Prince Afolarin twitted on Saturday