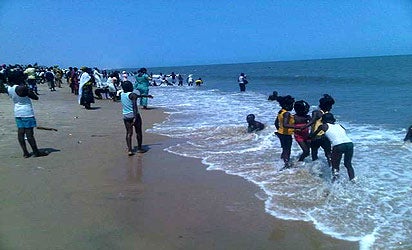 Tragedy struck Easter eve at Ibeju-Lekki area of Lagos State as two teenagers drowned in a beach within the community.

Their identities were given simply as Dare, 16, and Fawas, 15.

This is just as a 28-year-old man was arrested, weekend, for defiling an eight-year-old girl, who was left in the care of her elder siblings, in Ikorodu area of Lagos.

Vanguard gathered that the teenagers that drowned were residents of Epelemeje Orufun community, in Akodo, Ibeju-Lekki.

They were said to have gone to the beach with other children to swim.

The Commissioner of Police, Lagos State Police Command, CP Hakeem Odumisu, as gathered, deployed the Marine Police Team to the area on search and rescue operations.

He, therefore, advised parents to monitor their children and ensure that they remained at home during the lockdown period.