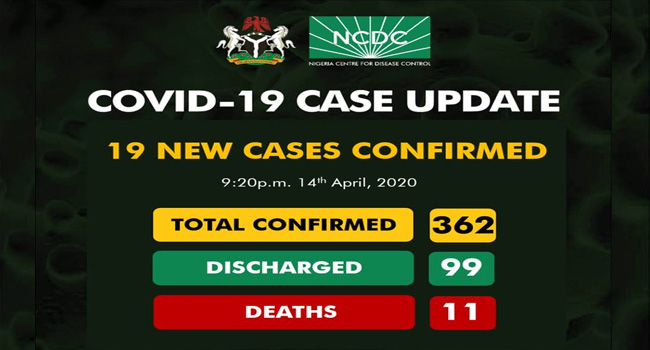 Nineteen new cases of COVID-19 has been confirmed by the NCDC, taking Nigeria’s total infections to 362.

Fourteen of the new cases are in Lagos, two in the Federal Capital Territory, Abuja, while Kano, Akwa Ibom, and Edo states had one case each.

The latest data from the NCDC also showed an increase in the country’s death toll, from 10 to 11.

Nineteen new cases of #COVID19have been reported as follows:

As at 09:20 pm 14th April there are 362 confirmed cases of #COVID19 reported in Nigeria. 99 have been discharged with 11 deaths#TakeResponsibilitypic.twitter.com/ySAhNzWnnU

Based on the new cases, the total confirmed cases in Lagos has surpassed the 200 mark as the state now has 203 cases. The FCT follows with 58 cases, while Osun State has 20 cases.

Benue, Niger and Anambra states each has one case.