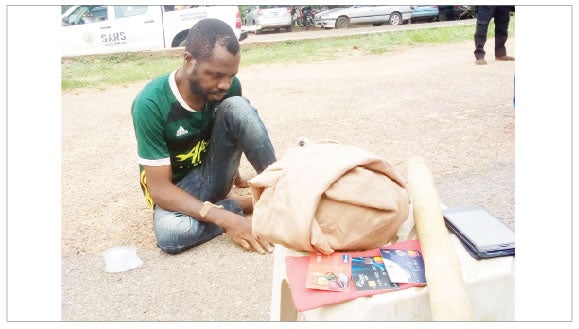 Abegunde, who is a house painter, allegedly attacked Ajibola at her Oluyole residence on Tuesday, March 17, 2020, and went away with some of her belongings, including three Automated Teller Machine cards.

During the parade of suspected criminals at the state police command headquarters, Eleyele, Ibadan, on Tuesday, the Commissioner of Police, Shina Olukolu, said Abegunde was an errand boy to the victim.

The CP stated, “Abegunde attacked the woman with a wooden object, strangled her and later stole her Tecno mobile phone and three ATM cards, having discovered about N2m in the victim’s account, when she sent him to withdraw money for her.

“The suspect was later arrested in his hideout in Akure, the Ondo State capital. Upon interrogation, he confessed to the crime and explained how he withdrew the sum of N120,000 from the victim’s account.”

Abegunde, a resident of the Apata area of Ibadan, said, “I am a painter and I just got married. My wife is pregnant. I had not killed anybody before now. I have no criminal record. I am from Otun-Ekiti in Ekiti State.

I met the woman (Ajibola) when I painted her house. This made her to like me. I have been with her for about a year now; I used to run errands for her, such as saving money, buying foodstuffs and so on.

“I knew she was rich. I don’t have parents and I don’t move with bad gangs. I know two of her children. One lives in Ibadan, while the other lives in Lagos. She was not the only one I used to run errands for. I run errands for other elderly people, because I like them.

I strangled the woman in her home in the morning. The child, who was living with her, had gone to school when I perpetrated the act. I don’t know what actually came over me when I killed her.”

Other suspected criminals, who were paraded, included a gang of kidnappers, who allegedly also engaged in robbery.

Members of the gang are Ibrahim Mohammed, aka Dogo, 39; Kasimu Salisu, 27; Buhari Musa, 35; Folorunso Elijah; and one other, simply called Shago.

It was gathered that Mohammed and his cronies abducted Mrs Omobola Adepoju and her sister, Abiodun Ifeoluwa, from a poultry farm in Badeku village, Egbeda area of Ibadan on March 16, 2020.

According to Olukolu, the hoodlums dispossessed the sisters of an undisclosed amount of money, their mobile telephones and other personal effects after taking them to an unknown location.

The CP said the hoodlums released the women after the payment of an undisclosed ransom, adding that items recovered from the suspects included five Bajaj motorcycles, which they used for operations, and N730,000.

Also in the police net are Usman Umar, 24; Shaibu Haruna, 20; Lawal Haruna; Usman Haruna, 28; and Aliyu Mohammed, 18, who allegedly specialised in robbery and kidnapping in Oyo town and its environs.

They were said to have attacked one Mrs Mary Oyeladun, and her daughter, Deborah, at their residence on Bode Thomas Estate, Oyo, with guns, cutlasses and other weapons on March 17, 2020.

The police said the hoodlums went away with Mary’s mobile phone, an undisclosed amount of money and her Toyota Camry car with number plate JBL 204 SA, and also took her to an unknown destination.

“The hoodlums contacted her husband, Rev. Israel Dada, and demanded ransom. A team of SARS operatives later rescued the victim after her husband had paid the sum of N1m as ransom,” the CP stated

They were said to have armed themselves with guns on April 7, 2020, and dispossessed one Kabiru Adewole of his TVS motorcycle at a desolate spot in the Agodi area of Ibadan.

The victim raised the alarm, which attracted a team of SARS operatives on routine patrol. Two of the suspected robbers were arrested at the scene, while the other escaped with the stolen motorcycle. One double-barrelled pistol and three cartridges were recovered from the suspects,” Olukolu said.

The CP, who lamented that some of his men were wounded in the course of operation, warned members of the public against raising false alarms about robbery operations in the state as this could easily dampen the morale of the security agents.