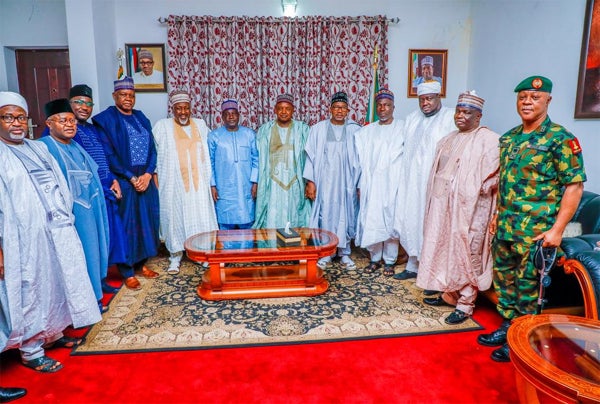 ABUJA—Governors in the 19 northern states of the federation have said states in the region cannot afford lockdown, noting that the development would come at a high cost.

The governors, acting under the aegis of Northern Governors’ Forum, took the position, as one of the decisions at a meeting of the Forum held via teleconference, presided over by the chairman and governor of Plateau State, Simon Lalong, on Monday night.

Their position did not go down well with those on the frontline in the fight against COVID-19, including the Nigerian Medical Association, NMA, National Association of Resident Doctors, NARD, and Association of Nigeria Nurses and Midwives, NANNM, who described it as dangerous to their operations.

But the governors in a statement by Macham Makut, Director of Press and Public Affairs to Plateau State Governor, also agreed to approach the federal government for funds since the preventive measures they had put in place “have eaten deep into the pockets of the states.”

The governors resolved to strengthen preventive measures through enhanced boundary controls and surveillance.

They also pledged greater collaboration to ensure there was synergy among them in the fight against COVID-19.

The statement read:  “We agreed that at the moment, each state would adopt the measure suitable to its setting because total lockdown of the region will come at a very high cost since most of our citizens are farmers who need to go to farms since the rains have started.

Among other decisions taken at the meeting was the setting up of a 7-man committee chaired by governor of Kebbi State Atiku Abubakar Bagudu, to fashion out the way forward. Other members are governors of Kaduna, Sokoto, Kwara, Nasarawa, Jigawa, Gombe and Nasarawa states

The committee, among other issues, would look at the economic impact of COVID-19 on the region and take a holistic look at the economic prospects of the region, with a view to repositioning it for less reliance on federal allocation and to prepare for the future by diversifying to areas of comparative advantage, such as agriculture, manufacturing, tourism and human capital development.

The meeting, which was conducted via teleconference and chaired by the Forum’s Chairman, Governor Simon Bako Lalong of Plateau State, also discussed the various measures put in place to curtail the spread of coronavirus and how the pandemic has affected their people as well as experience sharing on measures adopted by individual states to curb the spread of the virus.”

After receiving reports from various states, the Forum resolved to strengthen preventive measures against the pandemic through enhanced border controls and surveillance as well as greater collaboration to ensure that there is synergy among them in movement restriction.

They observed that so far, the lockdown measure in some states in the region has had varying levels of success, but also raised concerns that enforcing cross-border movements remains a challenge as some of the cases recorded in some states were imported from outside, despite the closure of borders by states.

The Northern Governors also commended President Muhammadu Buhari for the measures taken so far to deal with the pandemic and promised to do their part in working with the Federal Government to contain the disease.”

Not all states are on lockdown — Presidency

Reacting to the governors’ position yesterday, the Presidency said it was not the entire country that was under the lockdown order of President Muhammadu Buhari.

The President had in a nationwide broadcast on Monday, extended the lockdown order for Lagos, Ogun and the Federal Capital Territory, FCT, Abuja for another 14 days as a measure to contain spread of the dreaded virus.

Special Adviser to the President on Media and Publicity, Chief Femi Adesina, said President Buhari was specific on the states affected by the lockdown order.