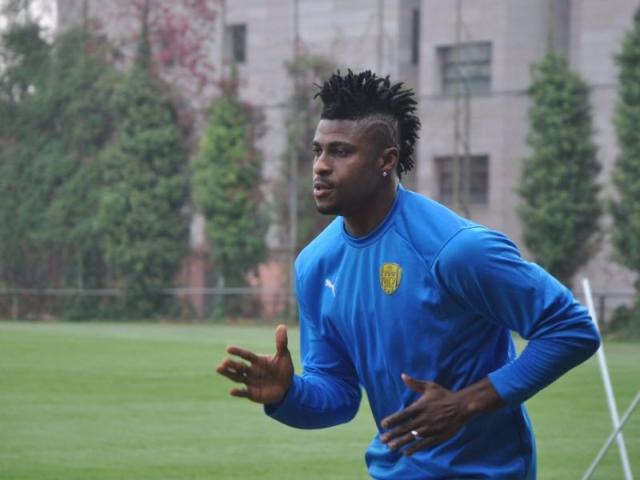 Nigerian striker, Lanre Kehinde has called on Super Eagles coach, Gernot Rohr to give him a chance in the national team set up by extending a call up to him to show what he is capable of adding to the team.

Kehinde, who plies his trade in the K-League at Incheon United, said he is yearning to bring his experience to bear having played for some European club sides in Israel and Turkey before moving to South Korea at the beginning of the season.

He told Sports Vanguard that playing for the Nigerian national team would be a dream come true. “I always have the desire to play for the Eagles. The team has the best players one can wish for but I can also add something vital to the Eagles.

“I have scored lots of goals in every club that I have played in especially in Europe before making the switch to Korea where I have also learned a lot under the guidance of coaches PARK sung Chul and Joong Yong Lim,” added 6’ 4 ½” striker, who scored 10 goals in 15 appearances for Denizlispor of Turkey in 2019.

The bullish striker stated that training has resumed in his club and he is hoping to be in good shape before the AFCON qualifiers begin so that he can catch the eyes of the national team coaches and selectors.

“The dream of every player is to play for his national team and I hope I will get the chance to show what I can do,” stated Kehinde who scored 20 goals in 32 appearances for Israeli second division outfit Hapoel Afula in the 2014/15 season.

We have some fantastic players in the Eagles and hopefully I will like to link up with them and show what I can do when the Nations Cup qualifier resumes. It is a tough task but I am ready to give it my best,” the former Dominion Hotspur and Kwara United player noted.