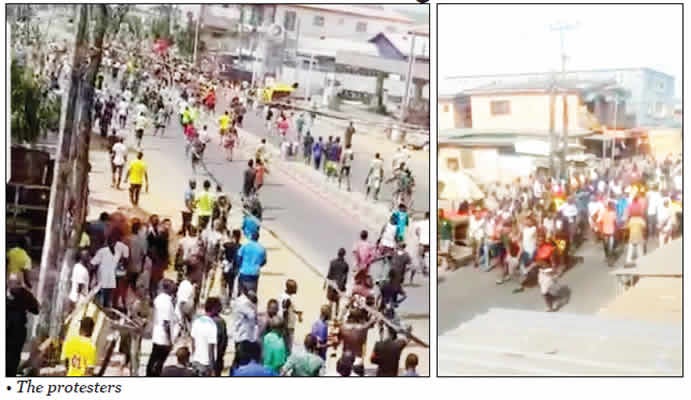 Armed youths, who protested against alleged attacks by hoodlums known as the One Million Boys, on Monday, threw residents of Mushin, Oworonshoki, Shomolu, Bariga and Isolo areas of Lagos State into panic.

FASTLOADED gathered that the demonstrations in the areas were as a result of the incessant attacks launched by the hoodlums on residents during the lockdown occasioned by the coronavirus pandemic.

In a bid to stop the attacks by members of the group, landlords and youths have been depriving themselves of sleep at night to form vigilante groups and complement the efforts of security agents.

It was learnt that suspected members of the One Million Boys had planned to strike on Monday, but youths in the affected areas armed themselves to repel the impending attacks.

Footages trending on the social media showed hundreds of armed youths taking to the streets and moving in the directions of the planned attacks by the hoodlums.

In the Oworonshoki area, armed youths, in conjunction with security agents, mobilised to prevent the hoodlums from attacking the area.

A footnote attached to one of the footages, which was posted by @Oworotvon Instagram, read in part, “One Million Boys repelled by youths in Oworonshoki amidst the battle against COVID-19 in Lagos and Nigeria as a whole. Notorious Street gang known as One Million Boys were in Oworonshoki today trying to cause mayhem.

“Youths in Oworonshoki, who have already been engaging in vigilante duties in the past few days, all came out en masse and chased the gang. Men of the Nigeria Police Force also assisted in repelling the attack.”

In the Mushin area of the state, footage also showed armed youths threatening to attack any apprehended member of the One Million Boys.

A resident of Olorunshogo, off the Agege Motor Road area of Mushin, Johnson Olamilekan, said when the youth got wind of an alleged attack by suspected members of the gang in the Ilupeju area of the state, they mobilised to forestall the invasion of their area.

He said, “We got information that the One Million Boys were operating in Ilupeju, which is very close to Mushin, so boys from Buhari, Oluwole and Post Office, among other streets, trooped out with cutlasses, bottles and other weapons and moved to the Ilupeju area to stop the One Million Boys.

The armed youths were over 100 and personnel from the Olosan Police Station and SARS also joined them around 2.30pm.”

The footage from the Mushin area also showed armed youths moving haphazardly to protect the area from attack by the gang members.

A similar situation was recorded in the Bariga area of the state.

When contacted, the state Police Public Relations Officer, Bala Elkana, said the state Commissioner of Police, Hakeem Odumosu, had gone round to talk to residents to stop creating panic through their actions during the lockdown, adding that the command had mobilised policemen to protect residents in the affected areas.

Elkana stated, “The Commissioner of Police has gone round with heads of other security agencies to talk to community leaders, landlords and the youth to stop burning tyres and stop coming out with weapons to cause panic and also reassured them that there was nothing like One Million Boys coming to attack them.

We have deployed personnel in the areas and we have even sent helicopters and they can see the helicopters hovering around the areas, and that is a diplomatic approach, which we believe is the best thing to do. We are not against communities supporting the police in policing their areas, but it can’t be done in an unorganised way. It can’t be done in such a way that it will create fear in the minds of people, so it must be done in a coordinated manner.

The residents are the ones making it look as if the areas are in a state of unrest; you cannot see videos of anybody being attacked; you only see videos or pictures of youths carrying weapons about in the name of protecting their areas. This cannot continue because they are putting so much fear in the minds of the residents.

“This is unacceptable and the way forward is for them to desist from coming out and displaying weapons, because that cannot differentiate them from the thugs that they are claiming to protect themselves from.

We will investigate the sources of the fake news in order to unravel those spreading it so as to stop the panic they are creating in the state.”