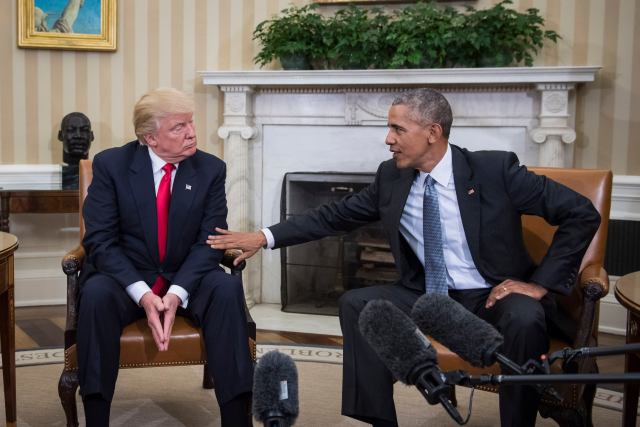 Barack Obama bashed Donald Trump’s response to the coronavirus crisis on Wednesday, claiming there is still no ‘coherent national plan’ to address the outbreak.

‘While we continue to wait for a coherent national plan to navigate this pandemic, states like Massachusetts are beginning to adopt their own public health plans to combat this virus––before it’s too late,’ the former president tweeted Wednesday afternoon.

Obama used the tweet to issue an attack on the president, but also praised Massachusetts for its response to the pandemic with a New Yorker article titled: It’s Not Too Late to Go on Offense Against the Coronavirus.

As several states continue to lament that they do not have the supplies to administer enough testing, some have taken matters into their own hands.

Massachusetts Governor Charlie Baker launched a plan for full-scale, statewide testing, which will be used to implement effective quarantine and treatment systems. The state was able to increase the number of tests administered from just 41 on March 9 to more than eight thousand by April 17.

Obama’s comments come as the House is preparing to pass a $484 billion interim coronavirus bill Thursday after it passed the Senate Wednesday – but several Democrats have bashed the legislation, claiming it doesn’t go far enough.

While the bill does include $25 billion for coronavirus testing, Democrats wanted there to also be a measure to send more federal money to state and local governments to help with mitigation on a more small-scale level.

Obama also attacked his successor at the end of March as Trump signed the CARES Act to provide $2.2 trillion in economic stimulus and relief for Americans and small businesses.

We’ve seen all too terribly the consequences of those who denied warnings of a pandemic,’ the two-term Democrat tweeted last month.

‘We can’t afford any more consequences of climate denial. All of us, especially young people, have to demand better of our government at every level and vote this fall,’ he continued at the time.

Obama’s tweet last month also included a link to a news story, but this one was about the Trump administration’s new rules that rolled back Obama-era vehicle fuel economy and greenhouse gas emissions standards that were aimed at slowing global warming.

That tweet came as the Trump administration faced growing criticism for failing to heed early global alarms about the virus outbreak – even as death tolls began to spike in places like China and Italy.

Trump has often praised his administration and task force’s response to the crisis, pointing to the fact that he shut down travel from China early on in the pandemic.

Obama many times remains silent on most issues involving his successor in the Oval Office and has stuck with his practice of not naming the president, especially while issuing veiled attacks on Trump.