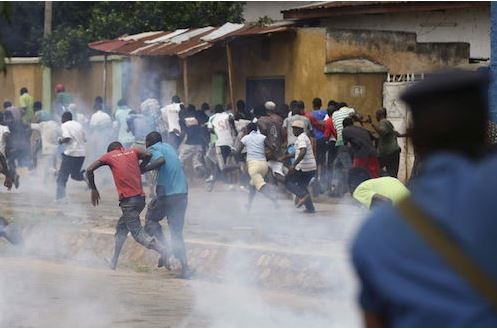 BENIN CITY – THERE is tension in Edo State over a reported clash between the people of Ehor in Uhunmwonde local government area of Edo State and the Hausa community over alleged stabbing to death of an indigene who was said to had argument with some suspected Fulani boys who just arrived the community.

There was heavy traffic which stalled vehicular movement for more than two hours in the area as Ehor is along the Benin-Auchi-Lokoja road. Several trucks parked along the road were destroyed and houses said to be housing hausas and fulanis were destroyed and torched.  It took the mobilsation of all the police personnel mounting roadblocks along the area notorious for kidnappings to restore normalcy.

A road user told Saturday Vanguard that “It took us two hours to find our way out of the community, we saw a massive deployment of policemen before we could move, several trucks packed along the road were destroyed and some houses were also torched before the police came”   When contacted, the Commissioner of Police, Lawan Jimeta confirmed the clash but said “Our focus was to restore normalcy, you know the incident happened in the area close to the Highway and that created gridlock but we were able to clear the road for free flow, we are still investigating and I expecting report from the DPO. But the area is calm now”