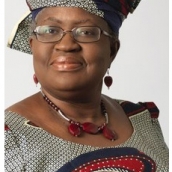 Ngozi is to serve alongside British business executive, Sir Andrew Witty in the same capacity, to mobilise international commitment to the initiative.

This was made known by Director-General of the organisation, Dr. Tedros Ghebreyesus, during the launch of the ACT Accelerator — via webinar from Geneva.

I would especially like to thank Sir Andrew Witty and Dr. Ngozi Okonjo-Iweala for agreeing to act as Special Envoys for the ACT Accelerator,” Ghebreyesus said in his remarks.

According to him, the initiative is an international collaboration aimed at accelerating the development, production, and equitable distribution of COVID-18 drugs, tests kits, and vaccines around the world.

Recall that the former Finance Minister, had earlier this month been named a member of the External Advisory Group constituted by the Managing Director of the International Monetary Fund (IMF), Kristalina Georgieva.

The group is to meet a few times a year, to provide perspectives on key developments and policy issues.