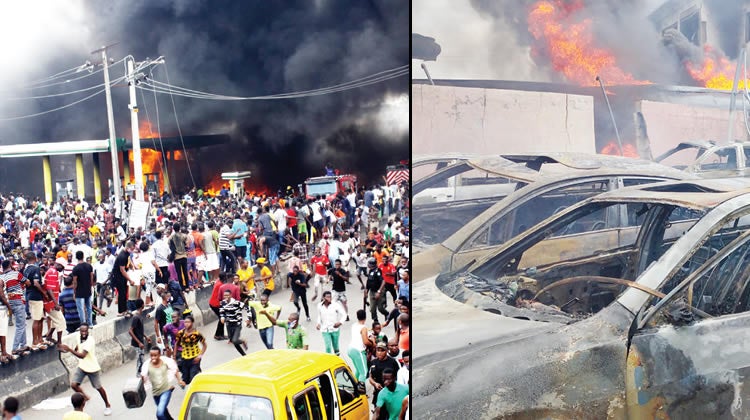 It was gathered that the fire, which started around 1pm, emanated from a diesel-laden tanker that was about to discharge its content into the station’s underground storage facility.

Apart from the filling station, over 30 vehicles in a car mart were also consumed by the fire as well as some buildings in the area.

It was gathered that the personnel of the Lagos Neighbourhood Safety Corps, the state police command and the Nigeria Security and Civil Defence Corps were on the ground to manage the crowd.

The station manager, Samuel Akinyemi, said the tanker had not commenced discharging its content when the fire ignited from the vehicle.

He said, “I cannot say how the fire started, because it caught us unawares, but what happened was that a diesel-laden tanker arrived and we stationed it with the expectation that business would resume tomorrow (Tuesday) and we wanted to be available to the public in anticipation that the lockdown would be relaxed by the President.

We stationed the truck at the appropriate place for discharge, but unfortunately, a fire that I can’t even say how it came about started and before we knew it, it had escalated. The fire started from the truck but nobody was there when it started.”

Akinyemi added that he could not estimate the damage done at the moment.

Speaking on the incident, the Director-General of LASEMA, Olufemi Oke-Osanyintolu, said the response team was able to extinguish the inferno around 4.49pm.

He stated, “The agency received a distress call around 1pm concerning a fire outbreak at the NNPC filling station located on Yaya Abatan Street, off College Road, Ogba, and this led to the activation of the agency’s emergency response plan

The agency’s response team, as well as other emergency responders, jointly fought and subsequently extinguished the flames around 4.49pm. No fatality was recorded.

“However, about 30 vehicles were affected. The combined effort of the emergency responders led to the salvage of buildings nearby.”

Oke-Osanyintolu added that continuous sensitisation and advocacy on fire safety measures must be embarked upon by relevant government agencies, while installation of fire extinguishers in both public and private premises should be encouraged.

He urged all petrol filling stations in the state to install at least one fire hydrant on their premises.

The acting Head of the state fire service, Margaret Adeseye, stated that the Alausa, Ikeja, Agege and Isolo fire stations responded to the incident.

She said, “On arrival, it was discovered that the fire involved the NNPC filling station, which went up in flames.

“The challenge encountered in managing the situation was that it took time for the crowd to be effectively managed. However, the filling station was salvaged from being completely burnt as only one dispensing machine was severely burnt, while another was partially affected.

Preliminary investigation into the cause of the incident revealed that the fire started when diesel was being discharged into the filling station’s underground storage facility from a 33,000-litre tanker belonging to Lado Oil.”

A motorcyclist, Kazeem Adeoti, who claimed to be among the first responders, said most residents were having a siesta when the incident happened.

He said, “Some victims, whose houses were affected by the fire, were sleeping but were roused from their sleep by the shout that the filling station had caught fire.

“Some of us assisted them by moving their property out of the apartments. But we thank God that no life was lost as of the time we were assisting the residents, but I don’t know what happened after I left the scene.”

Another eyewitness, Jide Adelegan, who stated that he was sleeping when the fire started, said some youths in the area helped in extinguishing the fire before the arrival of firefighters.

He stated, “Before we realised what was happening, some houses close to the station had been burnt down. There was confusion everywhere, as some people were trying to extinguish the fire and help those whose houses were affected, hoodlums were trying to steal their belongings and there was little the police could do about it.

When the fire service personnel came, they could not easily access the place due to the raging fire and when they eventually did, so many properties had been destroyed.”

A resident, who spoke on condition of anonymity, expressed concern over the security situation in the area after the fire had been extinguished and urged the police to beef up security.

What we need now is security, because some people are using the opportunity to steal people’s property.”