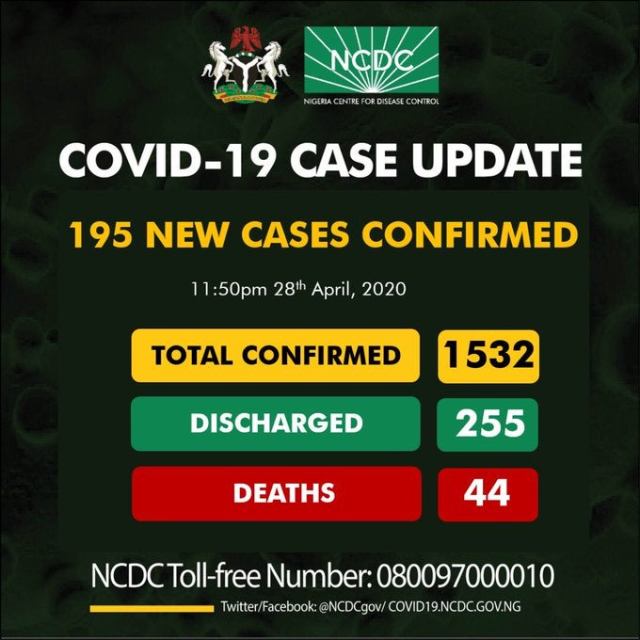 The Nigeria Centre for Disease Control (NCDC), Tuesday, said Nigeria has recorded  195 new cases of the Novel Coronavirus (COVID-19), bringing the total to 1,532.

The 195 cases reported, is the highest Nigeria has ever recorded in a day since the outbreak of the pandemic in the country.

It also said four deaths were reported in the last 24 hours and one new state, Nasarawa reported a case.

According to NCDC, one case previously reported in Gombe State is now recorded as a Borno State case, therefore the total number of cases in Borno is 53 and 46 in Gombe.

On the 28th of April 2020, 195 new confirmed cases and four deaths were recorded in Nigeria

” One new state (Nasarawa) has reported a case in the last 24 hours.

The president also declared a nationwide curfew from 8pm to 6am with effect from Monday, May 4, 2020.

Following the continuous rise of COVID-19 cases in Kano, Buhari also ordered an immediate lockdown of the entire Kano state to contain the virus.

Find below the list of states and number of confirmed cases so far.