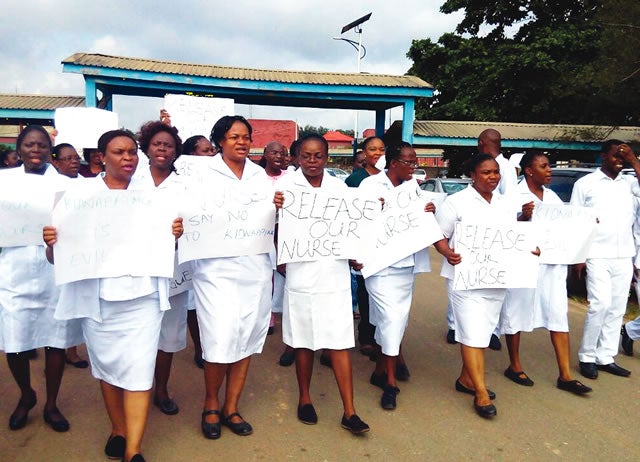 Nurses and Midwives attached to the University of Uyo Teaching Hospital on Thursday withdrew their services in protest over alleged assault on a nurse by a policeman.

The Chief Medical Director of the Hospital, Dr Emem Bassey, who confirmed the development, expressed disappointment over the actions of both the police officer and the nurses who downed tools despite appeals by the management.

He said trouble started when a woman was referred to the hospital following complications from a caesarian section that was carried out five days ago at a private clinic in Eket Local Government Area.

According to the CMD, the woman, who incidentally was the wife of a police officer was in a bad condition, noting that there was also the suspicion that she might have been infected with COVID-19 when she was brought to the hospital.

He added that the husband, who suspected that his wife was not properly attended, to assaulted the nurses leading to the action of the association.

He said “Sometime yesterday (Thursday), a case was referred here from a private clinic in Eket Local Government Area and the woman had a caesarian section and was brought in a very terrible condition; her kidneys were affected and she was not passing urine and will require dialysis.”

“Because of the pandemic, there was also the suspicion of COVID-19 because she was coming from Eket where there were rumours of infection.

“Unfortunately, she could not have a dialysis because her blood pressure was too low; she would not have survived on the dialysis machine. We asked the infectious disease team to examine her, but in their opinion, they said this might not be a COVID-19 case. Nevertheless, we still recommended a test for her.

“For whatever reason, the husband of the deceased felt that his wife did not receive enough attention before she died. I later received a text message from the local chapter of the NANNM that a nurse had been assaulted. I left and addressed the police and expressed my displeasure.

Bassey added, “I reasoned that the policeman acted wrongly but he might have acted that way because of the tragedy. Even, the nurse who was assaulted was there and I pleaded with her that the management was going to handle her case.

Reacting to the development, the state Commissioner of Police, Imohimi Edgal, expressed shock at the decision of the nurses to go on strike.

He said strike was always the last option when every other consideration must have failed.

Edgal stated, “About two hours ago, I got a call from the CMD of the hospital, asking me if I was aware that the nurses are going on strike; I asked if there was any problem.

“The reason was that strike is always the last resort when dialogues had failed. The nurses must tell us the reason. Certainly not because a policeman who happened to be the husband of the deceased was accusing them of bias and professional misconduct.”

“They ignored the patient and when she died, they tagged her a COVID-19 patient, “he alleged.