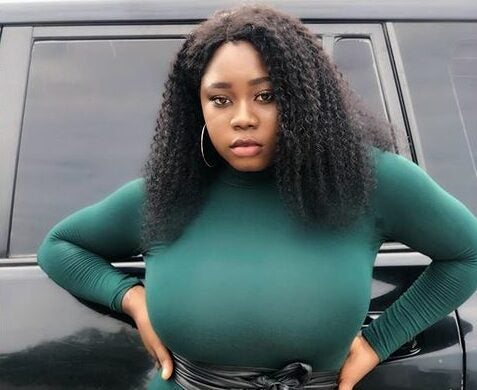 Busty Nollywood actress, Mandy Ujunwa Obi is as desirable as any woman could be in terms of frontal endowment. But if you are looking for secret relationship you may be on a wrong page with the ebony bombshell of lusciousness from Nnewi, Anambra State.

She writes, “ A secret relationship is a fraud. Any man that loves you will never hide you my sister.

One of the respondents to the post is a colleague of hers in the mammary section, known on Instagram as @Noradosh and she was quick to give the younger Mandy her own piece of mind.

“And a public relationship ain’t good either my sister” she had said.

Mandy Ujunwa was a makeup artist before becoming an actress and her first movie was an Igbo movie “Obi Ngbawa” in 2016. She has featured in movies like Angry Mother, Odida Kingdom, The Little Prince, and some Igbo movies like Ajondu, Onye-Nna, Dimona etc.