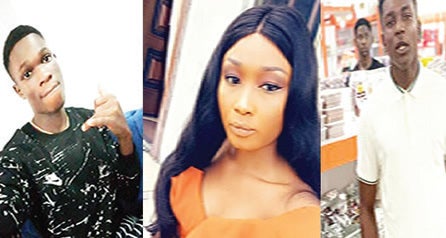 The President, Major General Muhammadu Buhari (retd.), on Sunday, directed the police to arrest all the suspects, who kidnapped and murdered three students of the University of Port Harcourt.

Joy Adoki, Nelson Nwafor and Fortune Obemba were kidnapped on April 7, 2020, and were later murdered by their abductors.

UNIPORT, however, said only Adoki was recognised as an undergraduate of the institution.

The Rivers State Police Command had stated that the deceased were killed and buried in a shallow grave in the Etio community, Eleme Local Government Area of the state.

One of the suspected kidnappers, Friday Akpan, was arrested on Thursday and upon interrogation, he made confession that led to the apprehension of two others.

The police also recovered one AK-47 rifle, three magazines and 72 rounds of ammunition from the suspected kidnappers.

Akpan, from Akwa Ibom State, confessed that two of his accomplices gang-raped Adoki before eventually killing all the victims.

“We held the three persons at the sand field. All of us, five in number, killed them,” he had stated.

Buhari asked the police to intensify the search for the remaining suspects in a bid to bring them to justice.

A statement by Buhari’s media aide, Mr Garba Shehu, said the President commiserated with the families of the students.

He also extended condolences to the university’s management and the Rivers State Government over the “unfortunate incident.”

Buhari described the incident as sad and heinous, regretting that the “evil perpetrators have cut short the prospectively bright journey of these youths.”

The President prayed that God would comfort all those mourning the young students and grant the souls of the deceased eternal rest.

Meanwhile, the Nigerian Bar Association, the Civil Liberties Organisation and the International Society for Social Justice and Human Rights have joined the call for justice for the victims, who were buried in a shallow grave by their abductors.

The Chairman, Rivers State chapter, NBA, Sylvester Adaka, said those arrested must be made to face the consequences of their action.

Describing the murder of the students as heinous, Adaka urged the police to carry out a thorough investigation with a view to arresting the culprits currently at large

He stated, “If is a heinous crime like that has been committed and people have been arrested, the NBA is demanding that such persons be brought to justice.

“Up till now, the policemen, who were involved, have not been brought to justice. In any case of a heinous crime like that, the position of any right-thinking Nigerian will be that people who have been fingered in the murder of the three students should completely have their day in court.”

Similarly, the CLO Director, South-South Zone, Steven Obodoekwe, warned that the three students must not die in vain, adding that his group and other human rights bodies would follow the matter to a logical conclusion.

Obodoekwe stated, “We commend the new Rivers State Commissioner of Police, Joseph Mukan, for the arrest of some of those behind the killing of the three UNIPORT students. Beyond that, we want to ask that the police should conduct a thorough investigation so that only those behind the heinous crime are brought to justice.

Having said that, people are aware that sometimes, the police are quick on their investigation and after that, they allow a serious matter to die in an unacceptable manner. We don’t want to see that in this case.”

The Chancellor, ISSJHR, Jackson Omenazu, said the gruesome murder of the three students was an act of barbarism, adding that justice must be served in the matter.

We must, as much as possible, discourage this act of barbarism and criminality in our society. A society where human lives do not mean anything anymore has a serious problem,” Omenazu said.