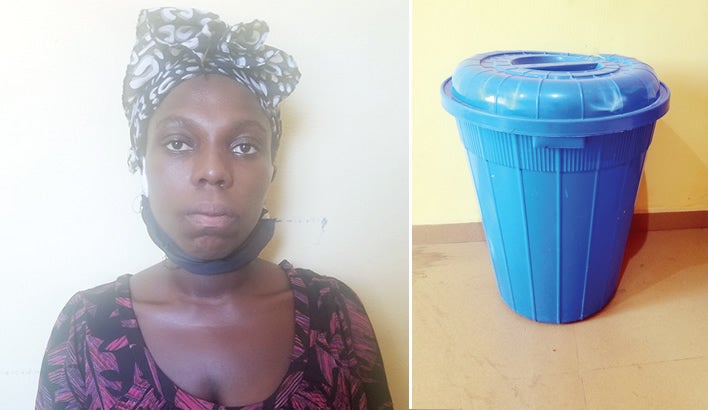 A 22-year-old mother, Oluwafunmilola Adisa, has been arrested for killing her daughter, Oluwanifemi, at their place of residence on Plot 221 Gowon Estate, in the Ipaja area of Lagos State.

The incident, which happened on Monday, also saw the woman dropping a note for her sister, Damilola, chronicling how she perpetrated the crime.

She blamed Oluwanifemi for the hardship she had been facing after she gave birth to her 21 months ago, adding that the daughter’s arrival cost her an admission to study law.

In a bid to alleviate her suffering, Oluwafunmilola said she drowned her baby in a bucket of water, adding that after committing the crime, she went to the Gowon Estate Police Station to report herself.

Explaining the events leading to the baby’s death, the Ogun State indigene stated, “I turned myself in after killing my daughter on Monday, May 11, 2020. “At first, I was thinking of strangling her, later I thought of suffocating her with a pillow, but my sister warned me to keep Oluwanifemi away from water after she had a dream and that gave me the idea of drowning her.

“On the day of the incident,  around 2pm, Oluwanifemi was assisting me to dress up, because she thought that I would take her out with me. But I told her that she was not going anywhere, because she would die that day and I would be going to the police station after killing her. So, I opened a big bucket of water, threw her in and covered the bucket, but she was able to push away the cover.

After perpetrating the crime, Oluwafunmilola stated that she wrote a letter to  her sister, Damilola, to inform her that she had fulfilled the promise of killing her baby, adding that she took the action because of the shame the baby’s birth had brought to her and aas a result of lack of money.

She stated, “The reason for the drastic decision is lack of financial help; I was tired and ashamed; when I gained admission to study law at the Obafemi Awolowo University, Ile-Ife, Osun State, I got pregnant and deferred my admission, which I later lost.

“So killing my baby and losing my admission have a connection. I felt I would be free if I kill her and would be able to go anywhere I like and no one would disturb me that I had a daughter outside wedlock.

“After she died, I removed her from the bucket of water, placed her remains on a pillow and covered her with a white cloth. I confirmed that she was dead, because her legs and hands were very pale; her tongue also popped out in between her teeth.

“I also dropped the note I wrote to Damilola beside her corpse and the reason I wrote the letter was to let my sister know that I was the one who killed Oluwanifemi and that I was going to report myself at the police station.

“I had been telling Damilola of my plans to kill her, but she usually prevailed on me. I wanted to carry out my plan on Sunday, but Damilola started calling our parents and the pastor, so I postponed it till Monday, when I was home alone with my daughter. Damilola had gone to work when I killed her.”

The letter that Oluwafunmilola wrote to her sister read in part, “Good day Damilola, thanks for everything you have done for me and Mama (Oluwanifemi), for the fake love, real love, false accusations, lies, and everything. The purpose of writing this letter is because Mama (Oluwanifemi) is dead. I soaked her inside a bucket filled with water and I am telling you to know that I have fulfilled it. Extend my greetings to father, pastor, friends. Goodbye forever, don’t look for me, save your money and invest.”

She claimed that the father of her baby, one Folarin Yusuf, abandoned her after she got pregnant.

When contacted, the state Police Public Relations Officer, Bala Elkana, said Oluwafunmilola was in custody, adding that she would be charged.

Elkana stated, “When we got the report that a woman was suspected to have killed her baby, our homicide detectives went there and found the baby dead on the bed. But the woman left a note beside the baby’s corpse that she was the one who killed her.

“She confessed that she dipped the baby in a bucket of water three times till she died and said she was frustrated and killed the innocent baby, because she was tired of life. The State Criminal Investigation and Intelligence Department has commenced investigation into the matter. The suspect will be charged for the crime.”