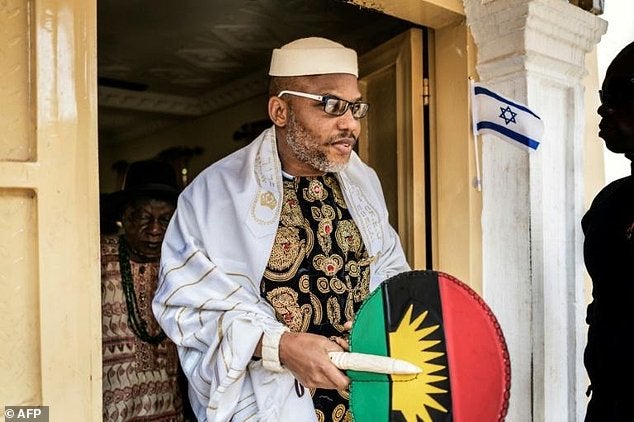 The Movement for the Survival of the Sovereign State of Biafra has dared the leader of the proscribed Indigenous People of Biafra, Nnamdi Kanu, to come back home and fight for Biafra.

MASSOB also cautioned Kanu to desist from insulting its leader, Ralph Uwazuruike over issues concerning the struggle for Biafra.

Speaking in a telephone interview with our correspondent on Thursday, the movement’s National Director of Information, Sunday Okereafor, said it was wrong for Kanu to stay in Canada, United States of America or London and think that he could achieve Biafra from outside Nigeria.

Okereafor also faulted Kanu for accusing Uwazuruike of thwarting the fight towards achieving a sovereign state of Biafra, adding that the MASSOB leader brought the IPOB leader into the struggle.

He maintained that the IPOB leader would not be able to achieve Biafra by speaking from London, Canada and America.

“MASSOB says on Biafra, we stand. Nnamdi Kanu can’t say that he is fighting for Biafra and he is staying in America, London, Canada, Australia. Every day, he is flying; he should come back home and pay the price.

“Also, Thomas Jefferson of America stayed in America and fought for their own freedom. So, Nnamdi Kanu should come home; he should bring his own members home and fight, rather than castigating Uwazuruike.

He stated that MASSOB would continue to maintain its non-violent approach towards achieving Biafra, adding that some people were working towards hijacking the struggle from the movement.

Uwazuruike is going the normal line in which he is supposed to go and get Biafra. We don’t carry arms; so, how can you expect us to carry arms. Kanu is a freedom fighter; how would you run away from the people he is fighting for?”