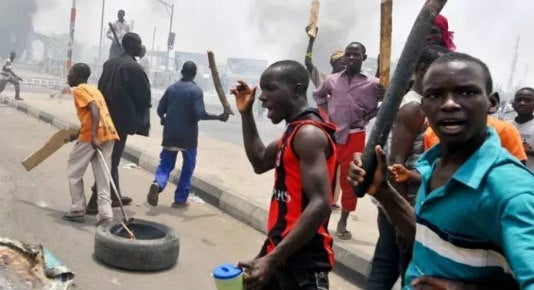 The crash which occurred along Akure-Owo highway in Akure involved a trailer, a car and a motorcycle few meters away from the state headquarters of the Federal Road Safety Corps, Akure.

Vanguard learnt that the Okada rider while trying to avoid being hit by a trailer, swerved to another lane and faced an oncoming car from the opposite direction.

The two persons on the Okada were crushed killing them instantly.

Their remains have been deposited at the morgue of the University of Medical Sciences Teaching Hospital, Akure.

Head of Operations of the FRSC , Mr Olusegun Ogungbemide, confirmed the incident to newsmen.

Ogungbemide said, ” The accident happened after seven o clock on Sunday evening and the two people on the okada were killed”

Contacted, the Police spokesperson Mr Tee-Leo Ikoro confirmed the incident adding that some arrests have been made in connection with the burning of the vehicle.

Ikoro said ” By the time our men got to the scene of the accident, the vehicle had been burnt down.

He added that ” we have commenced investigation into the matter but some people had been arrested.