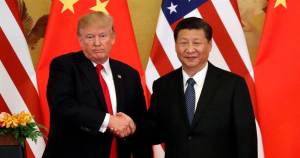 China said Sunday that its relations with the United States were “on the brink of a new Cold War,” fuelled partly by tensions over the coronavirus pandemic that has killed nearly 350,000 people worldwide and pitched the global economy into a massive downturn.

Fresh tensions between Beijing and Washington emerged as virus restrictions continued to shape and remake lives around the world, and in very different ways.

They muted celebrations by Muslims of the end of Islam’s holy fasting month of Ramadan; and they produced a decidedly mixed picture on newly reopened US beaches, with masks common on some and drawing jeers on others. One jam-packed pool party in Missouri, footage of which went viral, was a joyful bedlam of bodies just feet or inches apart from each other.

More European nations meanwhile moved to ease their lockdowns, with virus trends improving and summer nearing. They loosened restrictions that have kept restaurants, bars and hotels shuttered, devastating tourism, and they moved toward reopening more schools.

Globally, more than 5.3 million people have been infected by the virus, which most scientists believe jumped from animals to humans — possibly late last year at a market in the central Chinese city of Wuhan.

US President Donald Trump has accused Beijing of a lack of transparency over the outbreak, suggesting the virus may have leaked from a top-security Chinese laboratory.

Chinese Foreign Minister Wang Yi said Sunday that Washington seemed infected by a “political virus” but that Beijing would nevertheless be open to an international effort to find the coronavirus source.

“Some political forces in the US are taking China-US relations hostage and pushing our two countries to the brink of a new Cold War,” Wang said.

While once hard-hit European nations relax lockdowns as they work to salvage battered economies, other countries such as Brazil are emerging as new centres of the pandemic.

Trump on Sunday suspended travel to the US by non-Americans leaving from Brazil. There was no immediate comment from the Brazilian government, run by Trump ally President Jair Bolsonaro, who has been dismissive of the virus and of lockdown measures.

The US death toll rose Sunday night to 97,686, according to the Johns Hopkins University tracker, with more than 1.64 million cases of infection. The US is by far the country worst hit in both categories.