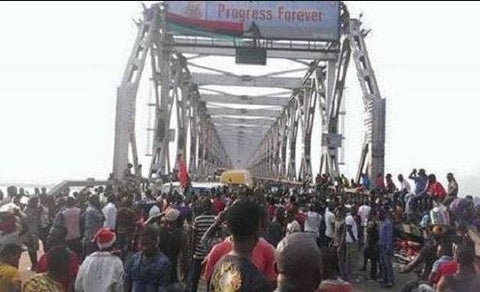 The Anambra and Delta Governments are currently holding talks to check the influx of people, seeking to cross the Niger Bridge in defiance of the presidential order restricting inter-state movements.

Mr C-Don Adinuba, Anambra Commissioner for Information and Public Enlightenment, made the disclosure in an interview with Newsmen in Onitsha on Monday.

Adinuba was commenting on the barricade built on the bridge on the orders of Gov. Willie Obiano at the Asaba-end of the bridge.

The iron barricade was reportedly pulled down at the weekend by youths in Delta.

The development necessitated a meeting where the two governments resolved to jointly police the Niger Bridge to curtail movement of ‘strange persons.’

“Top officials of both Delta and Anambra State Governments have met thrice today and will meet again tomorrow or so.

“The meeting is to conclude arrangements on how to check the influx of people, who defy the presidential order restricting inter-state movements as part of the far-reaching measures to check the spread of COVID-19,” Adinuba said.

According to him, the meetings have been held in convivial and brotherly manner.

“Subsequent meetings will follow the same trajectory of peace and solidarity as each party is quite committed to the battle against the coronavirus pandemic,” Adinuba said.