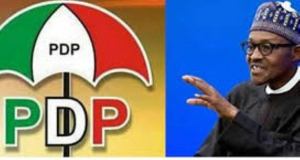 The Peoples Democratic Party, PDP, has flayed the President Muhammadu Buhari-led government, accusing it of turning the May 29 inauguration day anniversary into a day of grieving for Nigerians.

This is as the party stated that having reviewed the stewardship of the All Progressives Congress, APC-led government in the past five years, it realised that President Buhari and his team “have taken our country 60 years backward.”

Addressing a press conference attended by only a handful of journalists owing to the COVID-19 induced social distancing campaign; the national publicity secretary of the PDP, Kola Ologbondiyan, described the past five years of President Buhari-led administration as wasteful and a “season of the locusts.”

The text of the press conference read in part: “Under President Buhari, May 29 has become a day of grieving for Nigerians; a day for the commemoration of failed promises, reversal of gains achieved by past leaders and retrogression in our body polity as a nation.

“The PDP laments that the Buhari-led All Progressives Congress, APC, government has turned our nation into a wasteland, devastated her economy, shattered our national dreams, crushed the hope of citizens and set our country backward.

“The party describes as saddening that May 29, under President Buhari, has become synonymous with the enthronement of incompetence, insensitive leadership, endemic corruption in high places and governance by propaganda and false performance claims.

“The PDP laments that the APC administration has reversed all the gains achieved by the PDP for which May 29 was always celebrated and left the country dejected and despondent.

“This administration has failed woefully in its three major governance planks of provision of security, economic recovery and fight against corruption.

In the last five years, the APC administration has done nothing but driving our nation along the precipices; reneged on all its campaign promises, ruined our productive sector, frustrated our farmers, manufacturers and small scale entrepreneurs, devalued our naira, wrecked employment opportunities for our youth, turned our once prosperous nation into the poverty capital of the world while accumulating huge foreign debts for this generation and the unborn.”

Our party had already alerted Nigerians that with the volume of borrowing, President Buhari and the APC have placed our nation on the international auction market.

It added: “In the last five years, corruption has also worsened in government circle as shown in Transparency International, TI’s corruption perception index.  Federal Government agencies such as the Nigerian National Petroleum Corporation, NNPC, Federal Inland Revenue Service, FIRS, National Health Insurance Scheme, NHIS, among others have been opened up for pillaging by the cabal in the Presidency and the APC

Under the APC administration, insurgents, marauders and bandits, who have been pushed to the fringes under the PDP, have resurged and now having field day ravaging communities and killing our compatriots while government continue in its lip service and empty condolence messages.

“It is distressing that instead of heeding wise counsel to accept failure and avoid making false performance claims, the Buhari Presidency just yesterday (Thursday), released a list of recycled fictitious achievements, including very insensitive claim of having routed out bandits; even as marauders were pillaging communities and killing our compatriots in Sokoto and other states, particularly in the Northwest.

A look at the list exposed reused figures and data without corresponding verifiable projects in any part of the country, apart from attempts to appropriate PDP projects.

“Our party once again asks President Buhari to wake up to the reality, accept failure and seek help since it has become clear that his administration as presently constituted has devastated our nation and leading us on a journey to nowhere.”