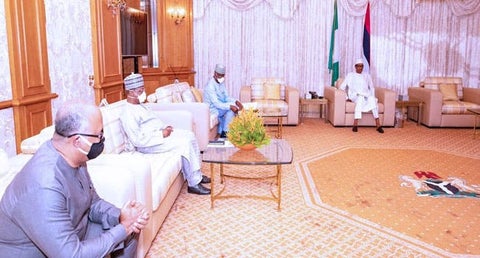 PRESIDENT Muhammadu Buhari and the Presidential Task Force on COVID-19, yesterday, met to consider the request by some section of the country to reopen worship centers.

This is as indications emerged that President Buhari may authorize further easing of the lockdown imposed on the country to contain the spread of the dreaded Coronavirus pandemic.

Chairman of the PTF and Secretary to the Government of the Federation, SGF, Boss Mustapha, led the delegation of the committee to meet with the President, as the first phase of two weeks of easing of the lockdown ends today.

Speaking to State House correspondents after meeting at the Presidential Villa, Abuja, Mustapha said a lot of recommendations had been made to the President and that the he would direct on the next step to take.

He also said that the country was witnessing community transmission which has now placed the burden on the shoulders of the states along side local government councils, traditional rulers and the religious leaders to decide the next action.

He said the PTF presented the assessment report of the last ease of the lockdown and made recommendations on the way forward. He said that the economy will be open further if President Buhari gives approval to the recommendations the task force has made.

Asked whether there is any hope of reopening the economy, he replied: “Well, we have started. Even in the first phase and the extension that came with it, substantial part of the economy was opened up by way of allowing agricultural production, people that produce fertilizer, and the oil and gas industry was never closed for one day, haulage of oil, refining and prospecting never stopped for one day and some aspects of the financial sector was opened.

“After we receive Mr. President’s approval tonight or tomorrow morning, we will now know which segments of the economy he has allowed for opening.”

He explained that the PTF met the president to submit its fourth interim report and apprise him of the progress made in the last two weeks as well as the challenges.

Mustapha said the task force has suggested the measures to be put in place going forward.

The SGF said: “It is important that they realize that no man is and island when you deal with public health matters, that whatever happens in a particular locality has the consequences of skidding off to other constituencies.

That is the message that we continue to drive in our pursuit of getting everybody to be on board. And I can assure you that there is no island as far as Covid-19 is concerned in this country.

We must integrate the different responses from all the communities in the states and have everybody to be on the same page.

“We will continue to pursue that and we will also ensure that it happens. I can assure you that.”

On the pressure to open worship centers, he said,   “That is part of what we have considered in totality, we would wait Mr. President response on that once I receive his approval going forward as to certain recommendations that we have put in place, we will see how that one happens.

The issue of easing up, you know we are in the first phase we have an extension of two weeks for the first phase, the next phase should be the second phase, along with that we came in with a lot of recommendations which we expect Mr President to consider.

“But I can assure you about one thing, that the ownership of the next phase will be the responsibility of the states under national supervision and coordination because we have gone into community transmission.

“ Where are the communities? The communities are in the states so the ownership of the next phase will be that of the states, the local government areas, the traditional institutions, the religious leaders at the different levels of our communities, because that is where the problem is.

“Like we have kept saying, 20 Local governments out of 774 account for 60 percent of confirmed cases in Nigeria today. So where are these 20 local government, they are in communities. It means we have reached the apex of community transmission and we must get the communities involved.

So the issues of places of worships, the issues of schools, the issues of some certain businesses that were not opened hitherto are part of the packages that we have looked at and   we have made the appropriate recommendations, but you know that Mr President is the only one that can take decisions in respect of that.

“In the framework, the states are subnationals, they have their own responsibilities too, so it is in the exercise of those responsibilities that they had meetings with those religious bodies and agreed on the guidelines and protocols on how they open up, but in the framework of the national response we are taking that into consideration.”

Asked whether Nigeria was winning the fight against COVID-19, considering the rate of infections, he said,” We are winning. As a matter of fact, you juxtapose the rate of cases with our fatality rate, which is basically about 3%, in other countries and other climes, it’s over 10%, but the most important thing that you will realise, when we started this exercise, we had only five testing stations, now we’ve ramped it up to 28, without correspondent increase in the number of deaths.

We’ve gone beyond 60,000 now, that reflects in the number of confirmed cases.  We’ve not reached the peak yet and I won’t want to fool Nigerians by telling them that we are out of the woods.

“No, we are not out of the woods. As we even open up and accommodate more enterprises, because we are trying to have a balance between livelihoods and life, there’s a likelihood of increase in transmission in cases.

“ But that should not be a source of despair. Like we have always said, the experts will tell you over 80% will contact Coronavirus and will not even notice that they have and that accounts for what is happening at the isolation centres when you see young men saying they are not sick and asking why they are being kept there.

“They are asymptomatic, they don’t show symptoms and they will ware it out.  There’s a 20% that is critical by virtue of certain factors, indices: age, underlying health conditions and vulnerability. That’s the percentage we are trying to protect and if we don’t do something in terms of management, in terms of putting in non-pharmaceutical intervention and guidelines to protect that 20%, about 5% of them can fall critically ill and eventually become fatalities in the numbers and that’s what we are trying to avoid.

So everything we are emplacing is to ensure we protect this vulnerable 20%. 80% will hare it out so the figure isn’t a thing of major concern.

“ Yesterday when I saw the 553 I called the governor of Lagos, I thought he was going to be under intense pressure, but surprisingly he said no, that it was expected because testing has been ramped up and as you ramp up your testing, it reveals what is happening in your community that prepares better for the kind of management care you will put in place.”