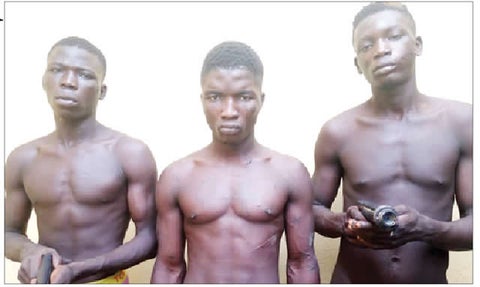 Men of the Ogun State Police Command have arrested three members of an armed robbery syndicate after a gun duel.

Oyeyemi said the suspects were arrested following a distress call that armed robbers invaded the Idanyin community in Agbara, Ado-Odo/Ota Local Government Area of the state.

He stated that the police got a hint that the suspected robbers were raiding houses, dispossessing the residents of their belongings and inflicting injuries on them.

According to the PPRO, the Divisional Police Officer, Agbara, SP Saleh Dahiru, led his anti-robbery team to the scene and met the robbers attacking one Kamieyefa Omosivwe and Oluyemi Olajide.

He stated, “On sighting the police, the robbers launched an attack on them, but they were overpowered and three members of the gang were eventually arrested, while one escaped.

Recovered from them were two locally-made short guns. The injured victims have been taken to hospital for treatment.”

Oyeyemi said the Commissioner of Police in the state, Kenneth Ebrimson, had ordered the immediate transfer of the suspects to the Special Anti-Robbery Squad for discreet investigation.