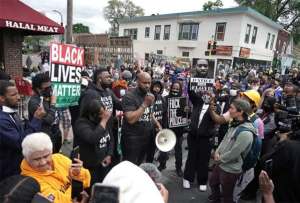 A week of protests over the death of George Floyd, an unarmed black man, at the hands of a police officer in Minneapolis has rocked the United States

Tens of thousands of people, from all ethnic and demographic groups, have taken to streets in cities across the United States to demand an end to police brutality.

Below, some of them explain in their own words why they are demonstrating, their experiences of the protests so far, and what they hope America’s biggest civil unrest in years will achieve.

– A student on the front lines –

She felt “sick to my stomach” after watching the video that captured police officer Derek Chauvin with his knee on Floyd’s neck for nearly nine minutes and joined protests in Minneapolis.

“We saw live murder, there’s no way around it. It’s awful, and every officer should be charged to the highest degree,” she said.

“The first protest I made it to the front line on my knees, shouting ‘Hands up don’t shoot.’ I jumped and dodged from at least a few flashbangs from my head. It was very scary at times.

“The one time I didn’t see a flashbang coming, it struck me in the arm. I ended up getting a second degree burn from the Minneapolis police department.

“Personally around police officers, I do not feel comfortable. I hate to say it but they have so much power in the world right now that it’s scary anything can happen.

I’d never expected things to go like the way they did this week but I’m not surprised. Being black in America, this is what it does. This is how it affects us. It’s sad but this is it.”

– The mother educating her kids  –

Michelle Evans, a forty-something who works in marketing, took her two boys aged four and seven to the scene of Floyd’s death, hugging them amid a sea of flowers.

Fearing that the protests, which turned violent, were “too dangerous,” she expressed her solidarity and anger at the site which has become a memorial to Floyd’s life.

My boys, just by who they are, need to know that they have privilege, and that they need to be a part of the solution as they, as they get older,” she told AFP.

Crying, she denounced the “structural” racism of America.

“It’s how our country was founded, and it needs to be destroyed and built back up in a way that brings, equity, and inclusion for everyone.”

– A musician who won’t be silenced –

Tyqaun White, a 20-year-old musical theory major at Point Park University in Pittsburgh, has been protesting in New York.

“It’s gotten to a point where black people are just asking not to be killed. It’s just got to stop,” he said.

“We are angry. People are here dying and in poverty every day. And you want to kill us and just tell us to be quiet? No! We have to go out.

We are treated like animals, this is how black people have been treated for years and years.

“I understand why people would break the curfew and protest however they want to protest.

“We need to protest forever until this system is completely reversed and changed and built upon equality and freedom. I’m gonna keep fighting as long as I have to.”

Large demonstrations are rare in the predominately white area, one of the richest in the country and home to power-brokers such as cabinet secretaries, White House staff, lawyers and lobbyists.

“It feels like enough is enough and we really need to work on changing our policing, we need to change our society’s attitude towards race,” said Jeff.

“We’ve had centuries to get it right. We haven’t come close yet, but we’ll keep trying.”

“The more people that are involved in trying to counter the current racist attitudes of the nation, the better. There’s a role for everyone to play,” he added.

“As a white woman I have a huge amount of privilege,” said Lily.

“It hurts me so much to see people who are human not treated as humans. I just couldn’t sit at home and do nothing. I’m going to be out here until it changes. I’m not going away.”

Hipolito Arriaga, a 36-year-old of Puerto Rican origin born and raised in the Bronx, New York, served as a US Marine in Iraq and spoke to AFP on a march in Miami.

“Having served in the military, I thought we were sent overseas to protect the freedom of the people here, meanwhile the police here are treating us like we’re in a war zone.

“The same way, now here in this country they call us thugs. The president now wants to label us as terrorists for accessing our right to speak, our fundamental human right.

“They forget that the country was founded in revolution.”