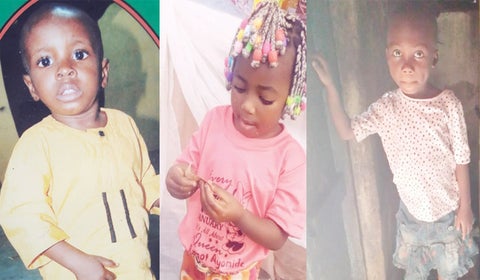 Residents of Otto, Ebute-Metta area of Lagos State say children are falling prey to alleged abduction in the community with at least five kids already missing.

The incident, which started June last year, has created panic among dwellers while parents of the victims languish in pain.

Recent among the cases was the sudden disappearance of Ogunjobi while she was playing with her friends last Tuesday in front of her parents’ residence on Akinlolu Street, Otto.

“Around 12pm that day (May 26, 2020), I was plating my mother’s hair outside while my daughter and her peers were also playing. I backed the playground but she called me regularly and I looked at her to confirm she was fine,” Ogunjobi’s mother, Aminat, recalled.

All was well until some minutes afterwards when she noticed her daughter’s voice was no longer audible.

A search was conducted with the hope that the little girl was somewhere within the vicinity. As the day wore on without any clue on her whereabouts, the neighbourhood was thrown into anxiety.

“After we looked around and couldn’t find her, we went to Iponri, Denton, Ijora and Alakara police stations to report,” Aminat stated grimly, adding that she had yet to get any information about her kid.

About six weeks earlier, four-year-old Taiwo of Otto Bridge Road – about 500 metres from Akinlolu Street – had also gone missing while playing around with her friends.

Her mother, Zainab Ademola, had visited a nearby Automated Teller Machine gallery to withdraw money, leaving her with her playmates.

Ademola explained, “The incident occurred on February 16. I went out to withdraw money that day. My daughter and her friend, Success, were with my grandma outside. I was at the ATM point when I got a call that Aisha (Taiwo) was missing. I learnt she, Success and one other child were playing around the vicinity but she did not return home.

“We asked her friends what happened but they could not say anything. It was later in the day that Success said a woman went away with Aisha. We went to Iponri and Denton police stations to report the case.”

Since then, life has not remained the same for Ademola and her husband, Yusuf Taiwo, as the thought over their only child’s whereabouts weakens their minds daily.

I find it hard to cope without my child. I pray every day that God should reunite her with us,” the distressed mother said amid grim looks.

“She was playing outside when she was abducted. We searched everywhere and reported to the police at Iponri and Alakara divisions,” Yusuf told our correspondent.

“There was a day a woman was arrested for attempting to abduct a child in the community. She was beaten up and taken to Denton Police Station. My wife went there to ask the woman if she knew about our daughter’s whereabouts. Police accused her that she mobilised a mob to attack the woman. They detained her from 1pm till 11pm and collected N25,000 before she was released,” he said.

On Friday, January 24, the household of a vulcaniser operator, Oriyomi Onikoyi of Jones Street in Otto Ilogbo Extension, was alive and bubbling.

Earlier that day, the 43-year-old man had heartily welcomed a grandchild from her first daughter. But by evening, the joy faded into thin air as his last child, Alimat, suddenly disappeared.

He said, “She was abducted in front of our compound. I came back from work around 8pm that day and I gave her the snack I bought for her. We were all rejoicing because my first daughter just gave birth that day.

“While Alimat was with her friends playing outside, there was power outage. I came outside about two minutes after but did not see her. I reported at different police stations, including Ikeja division.

We were informed that a girl was found in Ketu Police Station. We went there but the girl is not my child. People keep assuring me that I will find her. I have not been myself since she went missing. My wife has become lean; she cries every day.”

Another parent, Okoroafo Samuel, said he was returning from work on June 19, 2019 when he was confronted with the sad news that his three-year-old son, Daniel, had been abducted. He stated that all efforts to find the boy proved abortive.

“Daniel was two years and eight months when he was abducted. I left home around 5.30pm to hustle. I was returning around 9pm when a neighbour met me on the road and said they were looking for Daniel.

My wife told me she was washing plates in the kitchen with Daniel beside her. After washing the plates, she went to throw the dirty water inside the gutter. By the time she came back, she could not find him again. The kitchen is in on the corridors of our compound. We reported the case at the Iponri Police Station and went to different orphanages to look for him,” the father recounted.

About one year after, every other day brings trauma and fantasy for him and his wife as the family endlessly longs for a reunion. With all avenues explored without success, the couple now depends on God to intervene.

“I think about my son every day. Whenever I am on the road, I always think I would see him walking around and I would just pick him. I hope one day God will reunite him with us.

I have heard a lot of stories; I was told of parents who found their missing children five years after. I believe I will also see Daniel one day. I have been living in Otto for 19 years,” Samuel stated.

Our correspondent learnt that the parents of another missing boy, Romanus, relocated to their hometown in Benue State few weeks ago to mitigate the psychological trauma occasioned by the incident.

“The boy was abducted in October 2019. We want the police to assist us to apprehend those behind this crime,”said a resident, Dr Taofiq Akinlade.

Akinlade, the Executive Director, Zamzam Health Trust, a medical outfit in the neighbourhood, said the alleged abduction had telling psychological effect on the affected parents.

According to him, the community has a labyrinth of entrance and exit points, making it difficult to monitor strangers.

He said, “The psychological trauma is always tremendous and one of the effects is hallucination. The trauma is written on the faces of some of the affected parents. So far, there is no justice on the perpetrators and people are afraid who may become the next victim.’’

The head of local security guards in Lagos Mainland, Mr Ishola Agbodemu, lamented a security lapse in the community.

Agbodemu said, “We need the cooperation of all parents, community leaders and security agencies. All the five children abducted are still missing and there were two cases of attempted abduction.

“This case keeps recurring almost every three months. The recent one happened about two weeks ago. We report the incidents to the police but the support we get from them is not enough.’’

A councilor representing Ward A, Otto and Iddo, Abdulafeez Ishola, urged parents to be more vigilant over their children.

“At least I am aware of six cases of abduction in the community and all the cases were reported to the police,” Ishola said.

The Ojomo of Otto and Lagos Mainland, Chief Lamina Akin, said the community had been infiltrated by strangers who might be responsible for the missing children.

He stated, “This issue is very strange to me. I am 82 years old and I grew up here. There are a lot of people who claim to be residents here but we don’t know their houses. If some hoodlums commit a crime in Ijora, they will flee to Otto here for cover. The police can help us to work on this. At times, a person will rent a room but six persons will end up living there.”

The Police Public Relations Officer in the state, DSP Bala Elkana, advised parents to live up to their responsibilities at all times by providing care and protection to their children.

He said, “The children were playing and went missing. We have commenced investigation. The parents need to put an eye on their children. They owe them the duty of care and protection. Parents leave their children unattended to and go about. The kids also roam about and they may not be able to find their way back home again.’’