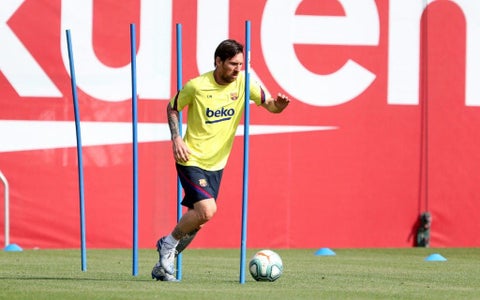 Barcelona return to league action on Saturday after a three-month hiatus as a result of the coronavirus outbreak, having returned to training at the beginning of May.

The reigning Spanish champions kick off their La Liga resumption with a trip to Mallorca, but were without Messi for a handful group training sessions last week, triggering concerns that he could miss their first game back.

The Barcelona captain missed two session and trained on his own on Friday and Saturday due to a minor quadriceps injury.

The club always insisted that Messi would be fit for Saturday’s clash with Mallorca, with manager Quique Setien asserting he was fine, and the Argentinian was pictured on the club’s official Twitter account training without any problems on Monday.

Messi is the league’s top scorer this season, with 19 goals in 22 appearances. He missed over a month of action at the beginning of the campaign due to a foot injury.

Full back Nelson Semedo and midfielder Monchu Rodriguez were pictured participating in full training too, having both taken recent knocks.

Barcelona will also be boosted by the return of Luis Suarez for La Liga’s restart. The Uruguayan has been absent since January with a knee injury, but Barcelona have confirmed that he will be available for their first game back.