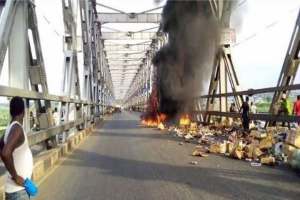 An articulated vehicle had caught fire on the River Niger Bridge in Onitsha, Anambra State, causing a heavy traffic jam for over five hours.

Vehicular movement into and exit of Anambra State was disrupted as commuters were held for hours as vehicles from the entry and exit points of the bridge parked while waiting for men of fire service from Onitsha and Asaba to arrive to put off the fire.

There was anxiety among the road users, as the cause of the fire could not be ascertained as of press time.

According to him, “At about today Friday 5 June, 2020 a Mercedes Benz Truck went up in flames on the River Niger Bridge, after developing some Mechanical/Electrical Faults.

“The Fire Service were contacted immediately and an FRSC heavy duty Tow Truck was brought in to tow the vehicle off the bridge after the fire was successfully extinguished by Julius Berger Construction Company, before the arrival of the Fire Service officials.

“Two male adults were involved, no injury, and no death recorded.”

According to FRSC official, a total of four male adults were involved in the crash, two sustained some degree of injuries, while one of the shuttle bus drivers was confirmed dead by doctors at St. John Hospital and Maternity, where the victims were rushed to, by FRSC rescue team from Onitsha Unit Command.

The Anambra State, Sector Commander, Andrew Kumapayi, confirmed the incident and admonished vehicle owners and drivers to always ensure that they check and service their vehicles regularly, paying particular attention to the brakes and electrical systems in addition to other units.

He condoled with the family of the dead and wishes the injured victims quick recovery.