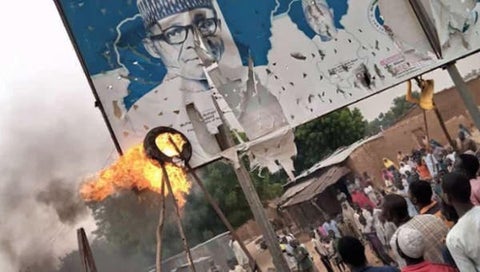 Angry youths yesterday shut Katsina-Kankara highway and other adjoining roads at Yantumaki in Danmusa Local Governmant Area of Katsina State, following the spate of kidnapping and killing by bandits in the area.

This came on a day Zamfara State government asked all Internally Displaced Persons, IDPs, to return to their respective villages, saying troops of the military would be deployed to the communities to secure them from bandits.

The protesters in Katsina also burnt down the billboards of President Muhammadu Buhari and the ruling All Progressives Congress, APC, in the town over the latest abduction of two persons in the town.

The irate youths disrupted vehicular movement on the busy highway to and from the Katsina State capital and grounded socio-economic activities in the town and parts of the state for several hours to press home their demand for security agencies to secure the release from bandits’ enclave, a resident health worker in the town, identified as Alhaji Mansir Yusuf, and his daughter, Fatima, who were abducted by gunmen around 1:00am yesterday.

The protesters lamented the abduction of Yusuf and his daughter barely nine days after the traditional ruler of Yantumaki, Abubakar Atiku Maidabino, 65, was shot dead by gunmen at his Yantumaki residence, while his security guard who narrowly cheated death in the attack, is still fighting for his life at an undisclosed hospital.

“The youths took to the streets since morning (yesterday), following another incidence of abductions, which have become too many in Yantumaki town and Danmusa Local Government Area,” said a resident of the town, who simply identified himself as Yakubu.

Spokesman of the Katsina State Police Command, Gambo Isah, a Superintendent of Police, who confirmed the protest, assured that normalcy had since been restored by the police and other security agencies.

Efforts to reach the Director General on Media to Katsina State Governor, Abdu Labaran Malumfashi, and the publicity secretary of the state chapter of APC, Abubakar Gambo Danmusa, last night yielded no result at press time.

Recall that state government had entered a peace agreement with the gunmen but despite the accord, communities in Katsina are still being attacked and residents killed.

The gunmen also attacked some communities in Batsari LGA of the state, and killed the council’s APC chairman.

Meanwhile, Zamfara State government has directed all the IDPs, displaced by bandits attacks, to return to their villages.

The state governor, Bello Matawalle Maradun, who gave the directive yesterday, assured that the military would be deployed to the villages to further secure them, adding that normalcy had returned in the state.

Special Adviser on Media, Communication and Public Enlightement to the Governor, Mallam Zailani Bappa, who spoke on his principal’s behalf, said those affected by the directive included those who left their villages as a result of recent banditry attacks that left 21 people dead in some parts of the state.

“This directive is a result of the governor’s recent visit to the victims in Tungan Togo, Jangebe and Gwaram, all in Talata Mafara Local Government Area of the state,” he said.

He quoted the governor as saying that the victims   would be taken to their respective villages with adequate security.

Bappa said the governor sympathised with the victims and promised that his administration would not rest on its oars until banditry was completely eliminated in the state.

He said the governor also called on citizens in the state to cooperate with the security agencies, even   as he prayed to Almighty Allah to expose   the perpetrators of the attack, so that they could be brought to justice.