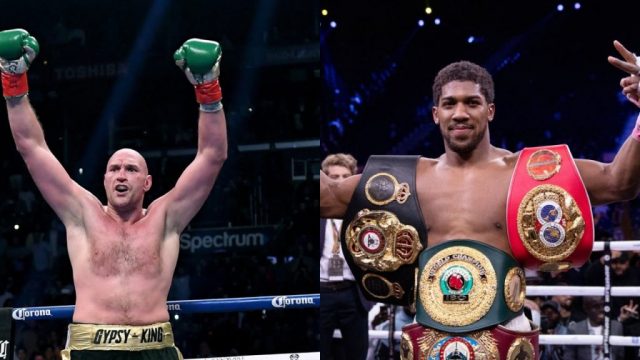 Anthony Joshua’s agent, Eddie Hearn, has disclosed that the boxer and Tyson Fury have agreed on a deal in principle to fight each other twice.

Hearn has been in negotiations with Fury’s camp for several weeks and has now said terms have been agreed upon.

Although no contracts have been signed yet, Hearn expects Joshua who is the WBA, IBF and WBO belt holder to take on WBC champion Fury, to determine the undisputed heavyweight king.

“We’re making great progress. There is still a lot to overcome. We are looking at venues and dates,” Hearn told Sky Sports on Wednesday.

“We’re in a good place. It’s fair to say that, in principle, both guys have agreed to that fight. Two fights.

(There’s) a lot to overcome in the meantime. We’re moving in the right direction. I’m confident that both guys have given their blessings for the fight to go ahead.”

According to Hearn, the first bout could take place in the summer of 2021.

Joshua is billed to fight Bulgarian Kubrat Pulev next, while Fury has a rematch with American Deontay Wilder.