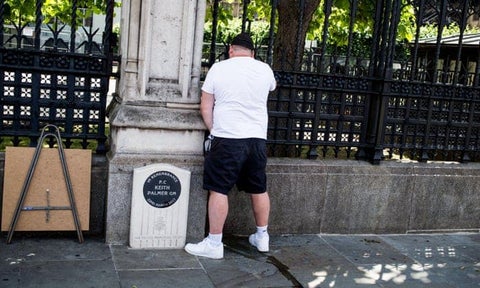 Police in the United Kingdom capital, London, said Sunday they had arrested a man suspected of urinating on a memorial to an officer slain in a 2017 terror attack, during protests in central London on Saturday.

The Metropolitan Police said the 28-year-old man was arrested on suspicion of “outraging public decency” after presenting himself at a police station in Essex, northeast of London, where he remained in custody.

The Met launched an investigation after a photo posted on social media appeared to show a man urinating on the memorial to Keith Palmer, the police officer killed in the 2017 terror attack outside parliament.

The urinating incident is thought to have occurred during violent clashes on Saturday which saw police arrest over 100 people, after thousands of self-styled “patriots” — backed by far-right groups — gathered in central London.

Those assembling said they were there to guard statues and memorials vandalised during recent anti-racism protests sparked by the killing of George Floyd at the hands of police in the United States.

The image drew widespread condemnation, with Conservative lawmaker Tobias Ellwood — who gave first aid to Palmer as he died — calling it “abhorrent”.

“Absolute shame on this man,” he said on Twitter.

Met Commander Bas Javid, who branded the photo “disgusting”, had vowed Saturday that the force would “gather all the evidence available to us and take appropriate action”.

“I feel for PC Palmer’s family, friends and colleagues,” he said.