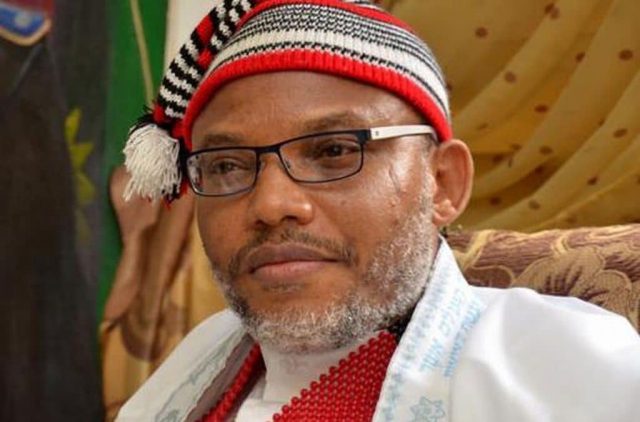 Following the recent incidents being reported in the Presidential Villa, leader of the Indigenous People of Biafra, IPOB, Nnamdi Kanu, has told Biafrans to get ready to leave Nigeria sooner than later.

Nnamdi Kanu was reacting to the reports of gunshots at the Presidential Villa involving Nigeria’s First Lady, Dr. Aisha Buhari, members of her immediate family, her Aide-de-camp, Usman Shugaba and Sabiu Yusuf, a Special Assistant to President Muhammadu Buhari.

Recall that following the death of Abba Kyari, President Buhari’s former Chief of Staff, Nnamdi Kanu had declared that Aisha Buhariis now in charge of the Aso Rock Villa.

According to Kanu, it is unheard of that while a President is still alive people fire gunshots around the Presidential Villa and his wife got threatened by aides.

“Biafrans prepare, we are going home this year by the grace of Chukwu Okike Abiama,” Nnamdi Kanu proclaimed on Facebook.

“Nigerians can now see what I saw and announced in June 2017 that Buhari is dead.

“Can you imagine the reports emanating from Aisha’s Aso Rock?

“Where are those [people] that said Buhari is alive? How can you forcibly remove a person from Aso Rock to the extent of involving the police when the man in charge of the house is alive?

You call police, I call police…when the Commander-in-Chief is around inside the same Aso Rock. Does this make sense to anybody?

“Aisha is now issuing directives asking people to obey her husband because they know the game is up,” he claimed.