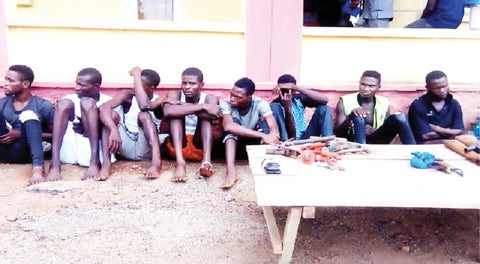 The Commissioner of Police in the state, Kenneth Ebrimson, paraded the suspects at the state police headquarters, Eleweran, Abeokuta.

Ebrimson identified one of the suspects as 28-year-old Godday Robinson, who allegedly raped, assaulted and pushed a lady, Favour, into a ditch in Agbara, Ado-Odo/Ota Local Government Area of the state.

The CP added that the suspect, after dumping the victim in the ditch, left her for dead.

The police boss said the victim regained consciousness and called for help.

According to him, the victim, who was later rescued, suffered spinal cord injury.

He added that Favour was currently bedridden at the National Orthopaedic Hospital, Igbobi, Lagos.

Robinson, however, denied the allegations, saying the victim was his girlfriend.

He said, “She is my girlfriend. She stayed under my roof for more than a year. Her siblings are aware of our relationship.

“We had a minor disagreement and she left home angrily. While I was going to my workplace, I met her on the road and accosted her. In the process, we had an altercation.

She held my shirt and when I was trying to free myself from her grip, she fell into the canal. I left her there and moved on.”

Speaking on the proliferation of arms in the state, the CP warned residents with arms and ammunition to surrender them to the police.

He said the command would give them a two-month grace period to surrender the arms and ammunition or risk arrest.