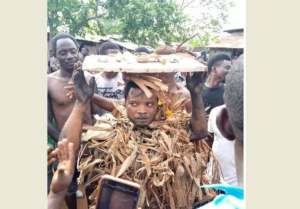 Reverend Paul Abam, the Popular Prophet, of Word Based Prophetic & Deliverance Ministries (a.k.a City of Deliverance, who was paraded around Itigidi for burying charms in a house, has confessed to planting charms in peoples’ houses to lure them to seek for “miracles”.

Abam said after the charms that the people will be forced to come to him for liberation as he would have to go back there to dig out the charms he had earlier buried.

FASTLOADED learned that he has been in the business for long and had been extorting money from people in the name of selling oil and liberation exercises for them.

During the parade of the prophet, an eyewitness, who pleaded anonymity, said, he( Rev Dr Paul Abam) has been deceiving people in the guise of a “real man of God ” but they have discovered he is fake and fetish.

He said: “He goes around with his men of God, who are like his foot soldiers that gathered the information for him on how to lure the victims.

“Then they bury charms on peoples’ property and make them believe they are charms from perceived enemies and if the people are gullible or desperate they fall for his trick.

“He has sold olive oil and other items for as high as N3000 and he would have sold nothing less than 250,000 bottles.

“The latest one was when he was caught burying charms at the factory of one of our sons in Itigidi, they hatched a plan to lure him and milk him off, unfortunately, they were seen planting the charms.

When they were caught we had to parade him in our traditional way so that our people will see and know who is behind their challenges because a lot of people have fallen victim,” he said.

“When he plants charms people pay N55,000 to clear the charms, there was a principal he sold oil to for N800,000 and more people who heard about the incident from other communities are speaking out,” the eyewitness said.

We know where kidnappers are. We are only being careful- Lai Mohammed