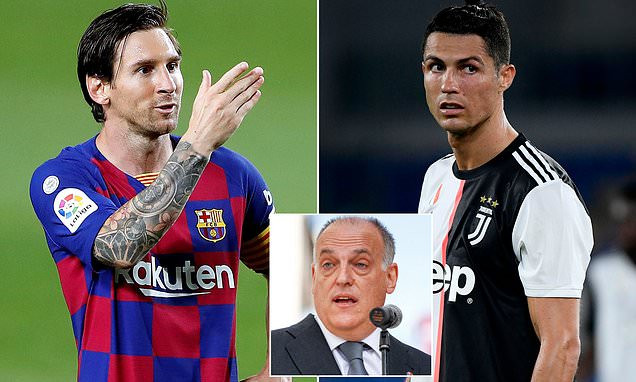 Spain’s LaLiga chief, Javier Tebas has taken a swipe at Cristiano Ronaldo by insisting his departure from Real Madrid in 2018 had no impact on the league.

The Portuguese striker joined the Spanish giants in 2009 from Manchester United and went on to become their all-time leading goalscorer.

Ronaldo was also arch-rival to Barcelona superstar Lionel Messi, as both of them battled each other for several individuals and team honour.

Despite losing Ronaldo, who is one of the world’s two best players to Juventus, Tebas said the switch to Italy had ‘almost no impact’ but admitted that Messi’s ‘case is different’ because if he leaves the Spanish football will notice his absence.

‘Ronaldo’s departure, even if they are upset in Madrid, had almost no impact because in LaLiga we have been preparing for years for the LaLiga brand to go beyond the players,’ Tebas said in an interview with RAC1.

‘Messi’s case is different,’ he added.

‘Messi is the best player in the history of football. We’ve been lucky enough to always have him in our league. I think Messi’s exit would be noticed.’

He went on to further praise Messi as an ‘icon’ in Spanish football history.

Tebas’ comments won’t go down well with Real Madrid fans as they are still struggling to replace the goals void left by Ronaldo.

The Portuguese superstar, who has five Ballon d’Or awards to Messi’s six, scored 451 goals in 438 appearances for Real Madrid. He scored 312 goals in LaLiga, 105 in the Champions League, 22 in the Copa del Rey, six in the Club World Cup, four in the Spanish Super Cup and two in the UEFA Super Cup.