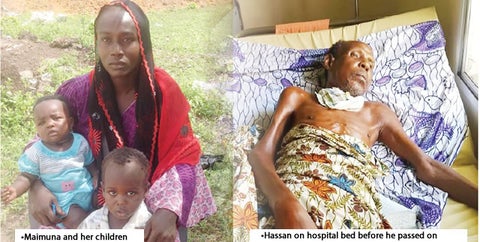 Abu Hassan, a security guard in a private compound in Orogun area of Delta State, was allegedly stabbed in the head with a file used for sharpening machetes during an argument with three men who wanted to steal palm fruits from the compound. His wife, Maimuna, tells MATTHEW OCHEI in pidgin English that two of her husband’s alleged killers have been released and that there are plans to release the third suspect

How was your husband killed?

On November 15, 2017, my husband was on duty and I was with him around 2pm. Then, three men, Apinoko Emmanuel, Oduvie Okpowe and Saturday Ijete in Orogun, Ugheli North Local Government Area of Delta State were trying to take away some illegally harvested palm fruits. They didn’t get the permission of the owner of the compound or my husband, who was the security guard.

My husband tried to question them but they must take the palm fruits away. In that process, one of them took a file from their bag and stabbed my husband in the head with it and left the file there.

Was that why he was killed or there was something else involved?

He was killed because he did not allow them to take the palm fruits away. I saw as they stabbed him; I was there. I saw when the three of them were arguing with him.

He did not die immediately. His head started bleeding and we took him to Orogun General Hospital and later to the Delta State University Teaching Hospital. My husband eventually died on August 2, 2018, about nine months after the attack. He could not talk, eat, or walk. He could not even recognise anybody, including me till he died. He was in misery, pain and anguish until he died. The killers never showed any concern nor visited my husband in the hospital. They never contributed a penny to his medical bills during his nine months of anguish, pain and misery.

How many children do you have?

We have four children. We were married for over eight years.

How difficult has it been to take care of them alone?

It has not been easy for me. It has been very difficult; I don’t know how we can cope. We have been at the mercy of God since he died. If not that my husband’s boss is still giving us stipends, it would have been a big problem for us.

Do you know if his killers have been sentenced to jail?

No, only one of them is facing trial. Policemen from Orogun station arrested the three of them and later released two of them on bail while my husband was still in the hospital. At the time, my husband could not do anything or move any part of his body even after a surgery was performed to remove the file.

Only one of the suspects – Oduvie Okpowe – was eventually charged while his accomplices have been free till date. The court later adjourned till June 15, 2020 for a ruling on the defendant’s bail application.

How were they caught?

They were arrested at Orogun town. But now, I suspect a conspiracy to cover up this case in order to free Mr Oduvie Okpowe who is currently standing trial. My husband suffered until his death and they are planning to release the only suspect standing trial.

The police report on the murder case is not in the case file, which clearly indicates that there is a conspiracy to conceal the truth with a view to securing the release of Oduvie.

Secondly, the autopsy report was not in the case file when the case was taken to court. Till this moment, the prosecutor and the police have yet to contact the doctor who performed the autopsy so as to enlist him as a witness.

The second suspect, an employee of the Delta State Oil Producing Area Development Commission, and the third person were not mentioned in all the documents tendered in court and not charged. Clearly, they are roaming freely while their victim is in the grave. There are strong indications that the one in DESOPADEC is the one financing them to cover up the case.

If there is truly a conspiracy to cover up your husband’s killing, does that scare you?

Yes, I’m afraid. Our lives are under threat. Before the trial, the prosecutor never spoke to me so as to prepare me for trial. I was never given any prior notice before the trial and my statement was not taken. I ran into the trial in court by chance.

There is already a bail application in court and judgment will soon be delivered. The question now is: how do you apply for bail to be granted to someone who is on trial for murder?  My fear is that they want to release him and he will be free like the two others while my husband is in the grave. Who knows their next line of action? The lives of my family members are at stake.

The statement I made at the Delta State Police Command and Zone 5, Benin should be in the case file. The police officer in Zone 5, who investigated the crime, Officer Ogedengbe, is supposed to be called as a witness.

Do you think justice is slipping away regarding your husband’s death?

Yes. The dimension the case is taking is making me to doubt the justice system. My concern is: why is the person who sent them to steal palm fruits still roaming the streets freely? I believe the case is not currently being given the seriousness it deserves.

Also, the state counsel and the Director of Public Prosecutions’ office have not enlisted the pathologist who conducted the autopsy or the police in Zone 5 who investigated the murder case as witnesses. I feel oppressed and frustrated. I want justice for my husband.

The government should come to my aid because I’m a defenseless poor widow. My husband was killed in the most dehumanising manner and I am left to fend for our four children alone. It makes me feel bad and frustrated. I have lost confidence in the police to prosecute cases to get justice.

What kind of person was your husband?

He was a nice man who cared for us. He was dedicated to his work as a security guard in the compound of Dr Ovie Uwanogo in Orogun town.

What are you doing for a living?

Nothing. I was a housewife. But the owner of the compound is helping us by still giving us my husband’s salaries so that we can feed. He is also helping with the court case.

What do the children think about their father’s death?

They are children and don’t know what happened but they have been asking about their father.