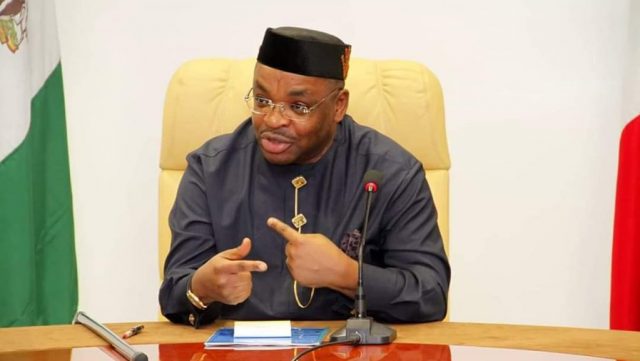 The Governor of Akwa Ibom State, Udom Emmanuel on Sunday has directed the immediate and indefinite seal of the Christ Embassy Church at Nung Akpa Ime, State House of Assembly road in the state.

The Secretary to the State Government, Dr. Emmanuel Ekuwem who announced this in a press statement explained that the State government made the decision following an attack by pastors and members of the church on a monitoring team who came to the church to ascertain the level of compliance to the guidelines for reopening of churches in the State.

Emmanuel added that the church was sealed to avoid the risk of community transmission of COVID-19 in the State stressing that the suspected Pastors and relevant members of the church will be made to face the wrath of the law.

The Statement reads in parts, “State Government and Christian Association of Nigeria ( CAN) Monitoring Team, while on a routine compliance/inspection visit to the Christ Embassy Church, Nung Akpa Ime branch, State House of Assembly Road, off Nsikak Eduok Avenue to enforce the Akwa Ibom State government/Nigerian Centre for Disease Control (NCDC)/World Health Organisation (WHO)/Christian Association (CAN) Guidelines and Protocols adopted to prevent community spreading of the dreaded COVID-19 pandemic in Akwa Ibom State, were obstructed, attacked and brutalized by the Pastors and some members of the church

In response to this act of lawlessness by that church and to avoid the risk of community transmission of COVID-19 in Akwa Ibom State, the Christ Embassy Church building and premises are hereby sealed up with immediate effect till further notice.”

The suspected Pastors and relevant members of the church will be made to face the wrath of the law.”

Recall that the State government in conjunction with CAN gave guidelines for the reopening of churches in the State.

But Christ Embassy church rejected the guidelines issued by the state government describing them as impracticable and unacceptable.

The presiding pastor, Emmanuel Effiong in a media briefing at the church last week, said since the church is not a member of CAN, such agreement between the government and CAN should not be binding on them.

The founder of the church, Pastor Chris Oyakhilome had earlier declared that the use of face masks during the worship in Churches as stipulated in the guidelines exposes worshippers to health hazards, while describing other guidelines including social distancing, sitting arrangement of not more than 200 among others as a conspiracy, and an attempt, to gag the church.

Part of the Statement by Christ Embassy reads in parts, “Our church is a global ministry and we do not believe or advocate unionism, rather we believe in the unity of faith. Today, we state without equivocation that we are not members of CAN or any other association in the country and as such hold the strong belief that we cannot and should not be bound by whatever decision the association reaches out with the government.

While we do not question the right of anybody or churches forming associations nor are we against CAN or any association setting up guidelines for their members, it is unacceptable to believe that such guidelines will be binding on non-members of their groups.

“The use of face masks for the entire duration of congregational worship is an act, which has been scientifically proven to be hazardous to the health as uninterrupted use of face masks over long periods may cause hypoxia, the absence of oxygen to sustain bodily functions.

“Also, we are expected not to sit more than 200 worshippers during each church service, among others. This is a clear attempt to gag the church.”