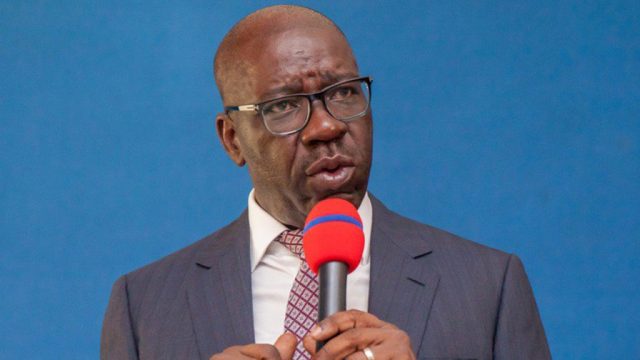 The Governor of Edo State, Godwin Obaseki has emerged winner of the primary election of the Peoples Democratic Party, PDP which held on Thursday.

Obaseki will now fly the party’s flag as candidate for the September’s governorship election with the highest votes of 1,952 out of total accredited votes of 2024. 72 votes were, however, invalid.

Why reacting to his victory, Mr Obaseki said he would not disappoint the people of the state for the confidence reposed on him. He said he believed that by the grace of God, he will be governor of Edo State for another four years.

Today makes a defining moment for our dear state. With today’s election result, it is clear that there is no mountain. I thank my family for the encouragement.

”I salute all our party members for standing tall when it became necessary to do so.

I almost quit running for a second tenure all because of overbearing god-father, but the PDP cover provided us with the umbrella when it was heavily raining. Kenneth Imasuagbon and others made this possible.

Earlier, chairman of the PDP committee in Edo Guber primary election, Gov Balla Muhammed of Bauchi state while delivering his opening address congratulated other aspirants who out of the overall interest of the party stepped down for the incumbent.

According to him, ”I want to salute the courage of other aspirants who stepped down for my colleague, Governor Obaseki.”