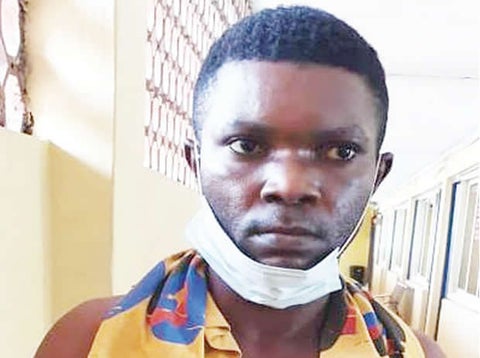 A sexagenarian, Eke Kanu, has been arrested by the Lagos State Police Command for allegedly impregnating his daughter at their place of residence on the Ebute Road, Ikorodu.

FASTLOADED TEAM gathered that after Eke impregnated his daughter, he took her to a chemist, where drugs were administered to the victim to terminate the pregnancy.

The state Police Public Relations Officer, Bala Elkana, said in a statement on Sunday that the victim was taken to the Mirabel Centre for examination and medical care, adding that the State Criminal Investigation and Intelligence Department had taken over the case.

Elkana stated, “On June 12, 2020, around 3.30pm, the Ikorodu Police Station received a complaint from a member of the FIDA that one Eke Kanu, 61, of Ebute Road, Igbogbo, Ikorodu, was having unlawful sexual intercourse with his 19-year-old daughter without her consent.

“The victim stated that her father started having sexual intercourse with her when she was young and threatened to deal with her if she told anybody about it. She further stated that when her father discovered that she was pregnant, he took her to a chemist, where she was given some drugs and an injection to terminate the pregnancy. The victim has been taken to the Mirabel Centre by the police for medical attention and forensic examination.

In a related development, 33-year-old Chibuike Kalu has been arrested for defiling his 14-year-old daughter in the Bariga area of the state.

Elkana said the victim had been taken to hospital for examination, adding that Kalu would be charged for the crime.

He stated, “On June 26, 2020, around 7.30pm, the Bariga Police Station received a report that one Chibuike Kalu, 33, of Amodu Street, Bariga, defiled his 14-year-old daughter. The victim was taken to the Mirabel Centre for medical treatment and forensic examination.

“The suspect was arrested and he confessed to the crime. He will be charged.”

Also, a salesman, Chinedu Obi, has been apprehended for allegedly defiling his employer’s twin daughters in the Aguda area of the state.

Elkana said the victims’ mother had left victims in the custody of the suspect, adding that Obi took advantage of the employer’s absence to defile the victims.

He stated that the suspect confessed during interrogation that he had been having sexual intercourse with the girls since 2019, adding that the case had been transferred to the Gender Unit of the command for discreet investigation.

The PPRO said, “On June 16, 2020, around 2.55pm, a woman in her mid 30s reported at the Aguda Police Station that her salesman, Chinedu Obi, 26, had sexual intercourse with her 12-year-old twin daughters when she left the two girls with him in her house. The suspect was arrested and he confessed to the crime.

“He stated that he started having sexual intercourse with the girls in 2019. The state Commissioner of Police, Hakeem Odumosu, has ordered the transfer of the case to the Gender Unit at the command headquarters, Ikeja, for discreet investigation and diligent prosecution.

“The CP advised parents not to trust anyone with their kids, especially female children. He further reaffirmed the commitment of the command to continually apprehend sexual offenders wherever they were in the state and make them face justice.”