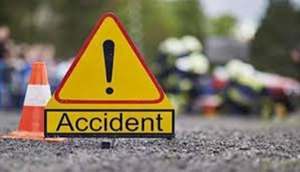 Three persons lost their lives while others sustained severe injuries in an auto crash involving a Dyna van and a trailer at the old Aba–Umuahia highway in Abia state.

It was gathered that the van with number plate; EZA 826 YF, was conveying wood and other roofing equipment rammed into a trailer loaded with cement at the Ntigha/Umuaro junction leading to Akwa Ibom state.

The trailer driver coming from the Ntigha/Umuaro road, according to an eyewitness, was said to be moving toward the old Aba –Umuahia highway when the crash occurred.

The eyewitness lamented that the crash would have been avoided, but for what they described as reckless driving and impatience on the part of the driver of the van.

Three people out of the six people in the Dyna van died on the spot. Three others sustained severe injuries. The trailer driver did not navigate very well before joining the Ururuka road which left the driver of the van, who was on speed confused and he rammed into the trailer.”

Policemen from the Eastern Ngwa Division conveyed the dead to the mortuary while sympathizers later took the injured to the hospital.