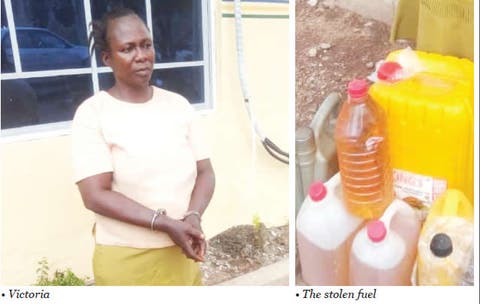 The operatives of the Inspector-General of Police Intelligence Response Team have arrested two persons, Victoria Ogunsomi and Shafe Abayomi, for allegedly siphoning fuel from a pipeline belonging to the Nigerian National Petroleum Corporation in the Ejigbo area of Lagos State.

FASTLOADED learnt that the suspects allegedly dug wells in their respective places of residence on Surprise Avenue, Ejigbo, and connected hoses with submersible pumping machines to the wells linking the pipeline.

It was gathered during their parade in Lagos on Monday that the suspects were siphoning fuel into jerry cans and tankers whenever the NNPC pumped products through the pipeline.

According to a police source, the suspects were arrested after a resident of the area, who was scared that the activities of the suspects could cause a fire outbreak, reported to the police.

The source said, “We got a call from a concerned resident of the Surprise Avenue, who alerted us to how Victoria and Abayomi had been siphoning petroleum products from the NNPC pipeline located close to their places of residence.

“According to the resident, the suspects have wells, which have underground hoses connected to the NNPC pipeline and whenever the corporation is pumping products through the pipeline, the products usually go into those wells and they are swiftly pumped into tankers by the owners of the wells and the tankers come at night to convey the products.

We acted on the information given to us; we stormed the buildings and found the wells with hoses and pumps in them and the odour of fuel filled everywhere. At Victoria’s apartment, we found jerry cans filled with petroleum products, but Abayomi smartly dismantled the hoses and pumping machine in his well before we got to his compound; we are currently working on tracing and apprehending the persons who have been buying the stolen products from them.”

Speaking to FASTLOADED TEAM, one of the suspects denied that they were pipeline vandals, adding that fuel flowed freely into the wells in their compound.

Victoria stated, “My late husband bought the land where we built our house in 1984 and when we dug the well in 1999, the water was good but we later discovered that there was fuel in it.

“We informed our landlords’ association about it and we all agreed that we would go to the police station and the local government, but they advised us to go to the NNPC, which sent two persons to check what was happening, and they took sample of the water and we didn’t hear anything from them after that.

I was arrested sometime in 2016 by SARS when I sold three jerry cans of fuel to someone and when I was released, the police warned me not to go near the well again, but because there is nothing to survive on, I had to start selling fuel again to feed my three children as my husband is dead.”