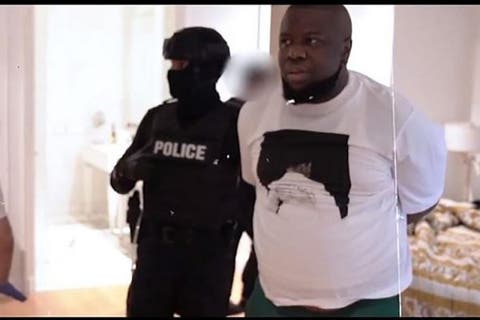 According to a statement by the US DOJ on Friday, Abbas, 37, arrived in Chicago Thursday evening after being “expelled from Dubai”.

The suspect was said to have made his initial US court appearance on Friday morning in Chicago and he was expected to be transferred to Los Angeles in the coming weeks.

Abbas, alongside his accomplices, including Olalekan Ponle (aka Woodberry), was arrested by officials of the Dubai Police and Interpol on June 10 for a series of crimes like money laundering, fraud, hacking of websites and accounts, impersonation and banking fraud.

Police said the suspects scammed over 1.9 million people in a fraudulent scheme worth $435m (N168bn). Thirteen luxury cars, estimated at N3.7bn; 21 laptops, 47 smartphones, 15 storage devices, and five hard disks containing data were recovered from the house where they were arrested.

Hushpuppi was subsequently handed over to the US Federal Bureau of Investigation on Thursday and extradited to the US, where he faces criminal charges alleging he conspired to launder hundreds of millions of dollars from business email compromise frauds and other scams, including schemes targeting a US law firm, a foreign bank and an English Premier League soccer club.

The US DOJ said a criminal complaint was filed on June 25 by federal prosecutors in Los Angeles after FBI’s investigation showed that Abbas financed this opulent lifestyle through crime and that he was one of the leaders of a transnational network that facilitated computer intrusions, fraudulent schemes and money laundering, targeting victims around the world in schemes designed to steal hundreds of millions of dollars.

In the DOJ statement, US Attorney Nick Hanna, said in 2019 alone, the FBI recorded $1.7bn in losses by companies and individuals victimised through BECs, “the type of scheme Mr Abbas is charged with conducting from abroad.”

In the affidavit filed against Abbas, it was alleged that he defrauded a client of a New York-based law firm out of approximately $922,857 in October 2019.

The affidavit also alleged that Abbas conspired to launder funds stolen in a $14.7m cyber heist from a foreign financial institution in February, 2019, in which the stolen money was sent to bank accounts around the world.

The statement read in part, “Abbas allegedly provided a co-conspirator with two bank accounts in Europe that Abbas anticipated each would receive €5m (about $5.6m) of the fraudulently obtained funds.

“Abbas and others further conspired to launder hundreds of millions of dollars from other fraudulent schemes and computer intrusions, including one scheme to steal £100m (approximately $124m) from an English Premier League soccer club, the complaint alleges.”

The statement added that Hushpuppi was being prosecuted by Assistant US Attorneys Anil J. Antony and Joseph B. Woodring of the Cyber and Intellectual Property Crimes Section.