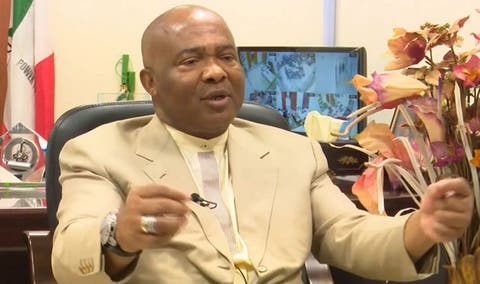 Clutching placards with various inscriptions depicting their anger, disrupting movements in and out of the state government house for hours.

Not even the presence of armed security men could scare the protesting workers.

All vehicles going in and out of the government house were turned back by the enraged workers.

Not even the plea by the Chief of Staff to the governor, Nnamdi Anyaehie, could make the protesting workers go back to their offices.

They insisted that their three months salaries should be paid before they would vacate the government house entrance gate.

The Union Chairman, Chinedu Awuzie, told journalists that the state government was being “wicked”

Awuzie said that despite ISOPADEC having only 320 workers as against the thousands of workers its sister commissions have in other States, the government had continued to shortchange them.

He said the leadership of the commission had severally met with the governor without anything fruitful as regards the payment of their salaries being reached.

Awuzie, accused the government of marginalising the state oil workers by allegedly encroaching into its treasury.

The Senior Special Assistant to the speaker of the state House of Assembly on oil and gas matters, Utonwa Uzoma, sued for peace.

The chief of staff to the governor asked the protesters to go back to their offices, assuring them that their salary arrears would be cleared, but they disagreed with him.