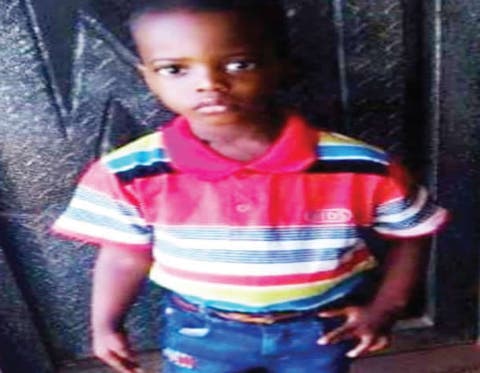 Family members of a three-year-old boy, Chimdindu Oledibe, are in distress over his disappearance during a service at the St. Joseph’s Catholic Church, Umunze, Anambra State.

FASTLOADED TEAM learnt that Chimdindu and his cousin, Mmesoma, attended the first Mass with the missing boy’s mother on Sunday, June 28, 2020, but suddenly they both disappeared.

Their aunt, Ufoma, who stated that Mmesoma was later found in another part of the state, said efforts to find Chimdindu had so far proved abortive.

She added that the police did not have any clue about the disappearance of the kindergarten pupil.

Ufoma said, “My mother took Gerald (Chimdindu) and Mmesoma to church on Sunday and settled them on a seat and went out for the choir rehearsal before the Mass began, but when she returned, she could not find them on the seat; only their bottle of water was there.

“She came home to check if they had returned, but when we told her that they had yet to come home, an alarm was raised and we started looking for them. After Mass, the parish priest came to our house and we went to lodge a report at the Umunze Police Station, but we were told to come back after 24 hours if we didn’t see them.

“Around 2pm that Sunday, we got a call from our parish priest that Mmesoma had been found around Ekwulobia by people coming back from church, and when she was asked where she was going to, she could only mention the name of our church, but she was taken to another St. Joseph Church in the area.

“She was able to tell them that it was not her church and the parish priest there called our priest to inform him of the development and when we got there, we confirmed that she was the one.

“After we found Mmesoma, we took her to the police station and she was able to tell us that a woman beckoned on her and Chimdindu to come outside the church and collect biscuits and that the woman took them and mounted a motorcycle.”

Ufoma told FASTLOADED TEAM that the family had been distressed as a result of the incident and urged anyone with information on Chimdindu’s whereabouts to contact the police.

The state Police Public Relations Officer, SP Haruna Mohammed, who confirmed the incident, urged members of the public to be on the alert and anybody with useful information on the missing boy to contact the police.

He said, “On June 28, 2020, around 1pm, there was a report at the Umunze Police Station by Rev. Fr. Basil Ezekeli of the St. Joseph Catholic Church, Umunze, that a male child of about three years, Gerald Chimdindu Oledibe, aka Bobo, who came for service along with his mother, one Mrs Charity Oledibe, went out of the church unnoticed during Mass and got missing.

“Following the discovery that the child was missing, the church immediately organised a search party and the entire church premises was searched but to no avail. Anyone with useful information about the missing child should either contact the nearest police station; St. Joseph Catholic Church, Umunze, or call the PPRO, Anambra State Police Command, on 08060970639 to enable the quick rescue of the child.”