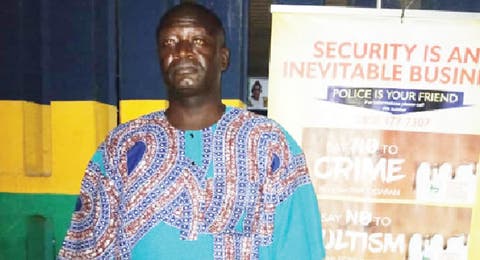 A 44-year-old pastor of Christ Apostolic Church, Ogo-Oluwa parish, Oluwafemi Oyebola, has been arrested by the Ogun State Police Command for allegedly raping, impregnating and procuring abortion for his daughter three times.

FASTLOADED TEAM gathered that the cleric had been living with his daughter since his wife, the victim’s mother, died a few years ago.

He was arrested following a complaint by his daughter at the Owode-Egbado Divisional Police Headquarters.

The state Police Public Relations Officer, Abimbola Oyeyemi, confirmed the incident in a statement on Tuesday.

He said the victim told the police that her father had been forcefully having carnal knowledge of her since 2015 when she was 19-year-old shortly after the demise of her mother.

The PPRO said, “The victim further reported that she got pregnant for her father three times after which her father took her to a nurse where those pregnancies were aborted.

After the third abortion, the suspect did family planning for her so she would not get pregnant again.”

Oyeyemi said the victim, upon realising that her father was out to ruin her life, ran away from the house and reported to a non-governmental organisation, Advocacy for Children and Vulnerable Persons Network.

“Consequent upon which she was taken to the Owode-Egbado Police Station to complain.

“After the report, the DPO Owode-Egbado division, SP Olabisi Elebute, led her detectives to the pastor’s house where he was promptly arrested.

During interrogation, the suspect made confessional statements that all his daughter said was nothing but the whole truth,” the police spokesman added.

The PPRO noted that the state Commissioner of Police, Kenneth Ebrimson, had ordered the immediate transfer of the suspect to the anti-human trafficking and child labour unit of the State Criminal Investigation and Intelligence Department for further investigation and prosecution.

In a related development, a Senior Magistrates’ Court in Port Harcourt on Monday remanded a 26-year-old man, Kelechi Nwakwo, in a correctional facility for defiling an eight-year-old pupil at his residence at Elele, Ikwerre Local Government Area of Rivers State.

The accused, it was learnt, was a private home tutor of the victim before he allegedly committed the crime on June 23, 2020, at his house in Elele, where he coached schoolchildren.

PUNCH Metro gathered that the accused allegedly inserted his finger into the girl’s private parts when he was alone with her.

The police prosecutor, Ochogwu Wilberforce, told the court that the offence was punishable under Section 218 of the Criminal Code Cap. 37 Vol. II, Laws of Rivers State of Nigeria,1999.

The charge read, “That you, Kelechi Nwankwo, on June 23, 2020, at Elele Town in Ikwerre Local Government Area of Rivers State, but triable in the Port Harcourt Magisterial District, did unlawfully have carnal knowledge of one (name withheld) aged 8, by inserting your finger into her vagina, thereby committing an offence punishable under Section 218 of the Criminal Code Cap. 37 Vol. II, Laws of Rivers State of Nigeria,1999.”

The Senior Magistrate, Lenu Baridam, declined jurisdiction in the matter and referred the case file to the Directorate of Public Prosecutions for legal advice.

The magistrate, however, ordered the accused be remanded in the Nigerian Correctional Service facility and adjourned till September 9, 2020.